joan crawford chiller double feature: 'i saw what you did' & 'trog'

Poor Joan Crawford at the end of her career.  You can tell her heart is just not into these B-movies even though she tries her darnedest to rise above the drivel material. 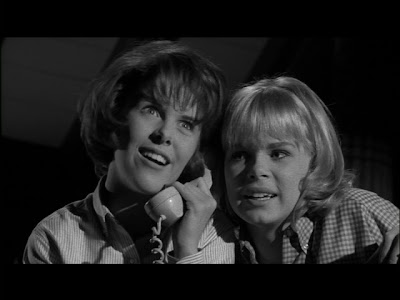 It has its moments but the William Castle flick I Saw What You Did is more like a gag than an actual motion picture.  Two chirpy teens (Sara Lane & Andi Garrett) and a kid sister (Sharyl Locke) decide to spend their sleepover randomly picking names from the phonebook to prank call.  When one of them utters, "I saw what you did, and I know who you are" to a man (John Ireland) who just murdered his wife, they fall into trouble.

The premise is fun and the movie is watchable and hokey though a bit too glib (there's a somewhat irritating insistent rinky dinky 'nanny nanny boo boo' mid-60s pop rock musical cue).  The blatant rip-off off of the Psycho shower scene is amusing.  Crawford doesn't add much as the murderer's mistress.  Castle's great trademark gimmick trailer is almost as good as the film itself. 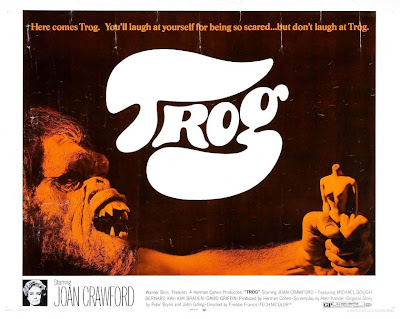 Oh, Trog.  You lifted the fog off of these January blues (with the depressing chatter of the 2012 Republican primaries in the background).  You are the funniest movie I've seen in a while.  I love the way your title character (in a cheap mask and makeup) and Joan Crawford [in an incredible array of pantsuits and skirt suits (and surgery scrubs!) in all shapes, pastel colors, and fabrics] interact with one another.  It was cute when Trog showed how a windup doll works.  You got a bit boring in the courtroom scenes however I howled when Crawford compared Trog to a "retarded child."  Your rubber dinosaur montage is ludicrous. When Trog goes on a rampage and scares schoolchildren in a sleepy English hamlet you spark to life.  You're a camp classic.  You give Joan's last moment in film a wistful, appropriately melancholy touch.  Thank you Trog for existing in this gloomy world.
Posted by MrJeffery at 5:25 PM

Email ThisBlogThis!Share to TwitterShare to FacebookShare to Pinterest
Labels: bad movies, Film, film reviews, i saw what you did, trog, william castle