see you on 'flamingo road' 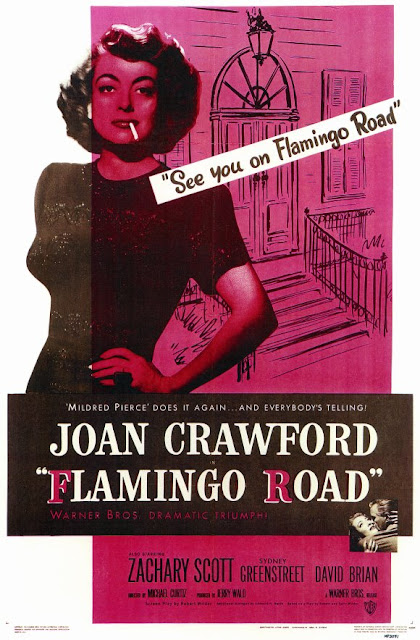 Flamingo Road is a classic tale of an outsider shaking up an idyllic town.  Joan Crawford is Lane Bellamy, a salty and street-smart carnival dancer, who, with the help of deputy sheriff Fielding (what a name!) Carlisle (Zachary Scott), finds a new job as a waitress in a sleepy southern town.  Lane and Fielding hit it off a bit romantically, much to the disdain of abominable, corrupt Sherriff Titus Semple (an excellent Sydney Greenstreet) who has his sights on shaping Fielding to be Governor.  Lane and Fielding soon clash, thanks to Semple's meddling, and Lane winds up working in a roadhouse run by tough, well-respected  Lute (Gladys George).  There she meets and wins the affection of a rich business man Dan Reynolds (David Brian).  Soon enough Lane ends up in fur coats, living in a mansion on the town's most enviable street, Flamingo Road, but not without some bumps along the way.

Michael Curtiz (Casablanca) shows fine craftsmanship with this clunky but winningly entertaining drama.  Crawford is strong in the lead role and George makes an appealing, no-nonsense roadhouse ringleader but it's really Greenstreet, in one of his last film roles, who makes this thing burn.  Utterly contemptible and creepily hostile, with his slick, fat white face, he makes the perfect villain (and reminded me somewhat of John McCain).  The scenes between him and Crawford are a hoot and the most emotionally compelling.  This also became a short-lived, early-80s primetime soap (NBC's answer to Dynasty) of which I am now curious to see! ***1/2