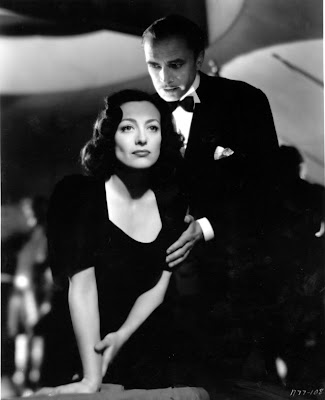 Known for his classic sparkly comedies, A Woman's Face is somewhat of a departure for director George Cukor.  This unusual and dark story was originally a play by Francis de Croisset that was later adapted as a 1938 Swedish film with Ingrid Bergman.   Joan Crawford is haunting in the lead role, the facially disfigured Anna--a notorious blackmailer.  Her beauty is restored with the aid of renowned plastic surgeon Dr. Segert (Melvyn Douglas).  She then becomes a governess for the prominent uncle (Albert Bassermann) of Torsten (Conrad Veidt), with hopes of abandoning her shady past and making a fresh start.  Mostly told in flashback from the courtroom testimonies of an eclectic array of characters (a unique storytelling device which works fairly smoothly here with such a vivid cast).  This is one of Crawford's most emotional roles and at times she is devastating.  The make-up is effective as well.  The film works less well in the third act when she moves to a chateau to take care of the almost unbearably shrill Lars-Erik (Richard Nichols), even though there's a few suspenseful scenes between them, including one that takes place in a cable car high above a mountain range.  Overall A Woman's Face is a fairly compelling mystery enhanced by Crawford's enigmatic presence. ***