making music in the dark, a review of 'humoresque' 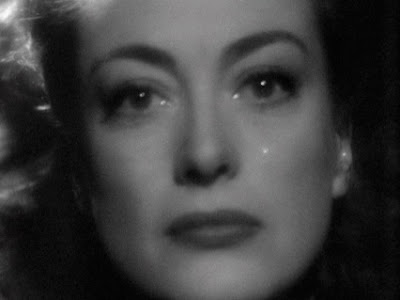 Jean Negulesco's 1946 film Humoresque is a far cry from Dvoark's sprightly lilt.  It's a gloomily lit portrait of two love affairs: a violinist's (John Garfield) unrelenting passion for his musical craft and his relationship with a hardened, alcoholic socialite.  The film begins in a dark room with a mournful Paul Boray reflecting back upon his more carefree years when he first discovered the violin.  Soon Boray devotes his young life to playing and practicing the instrument and becomes quite good.  As a promising young musician, he struggles a bit to survive.  His friend Sid (Oscar Levant) offers some help (and the film's comic relief). Then Boray meets the wealthy, unhappily married Helen Wright (Joan Crawford) who wants to see him "only as an artist" and she ends up jumpstarting his career.  As Boray becomes more and more successful, Wright and him become cautiously enamored with each one another.  After Wright's marriage crumbles, it seems as if they could begin a love affair.  Yet there is something cold and distant about their relationship.  They both suffer in their unrequited loves: Boray is in love with his music, Wright in love with Boray.

Humoresque is bolstered by a gorgeous selection of music impressively adapted by Franz Waxman.  Including both classical and (of its time) contemporary songs (a painfully sad cocktail bar singalong to "Embraceable You" is pulled off beautifully by Crawford), the music both speaks for and in spite of the language of the characters' longings.  An orchestral version of Bizet's music from Carmen is featured in a scene where Helen is unnerved by Boray's insensitivity.  The music is loud, jaunty and joyful in contrast to her emotions.  Gorgeously photographed by Ernest Haller, the riveting finale features Crawford on a windswept beach set to a radio broadcast of Wagner's "Liebestod" from Tristan and Isolde.  This memorable scene is definitely one of the highlights of the film and of Crawford's career. ***

Posted by MrJeffery at 8:11 AM