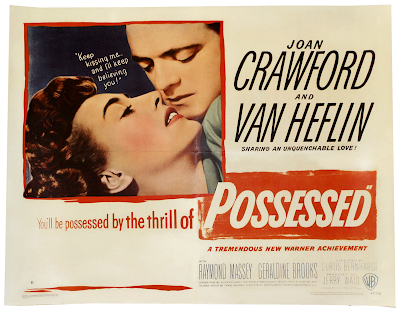 Joan Crawford often played characters desperately in love with men who didn't love back.  Brave, serious, and bold, Crawford could illuminate complex emotions with a simple glance.  The 1947 film Possessed, directed by Curtis Bernhardt, begins with Crawford aimlessly wandering the streets of Los Angeles.  She's admitted to a hospital, where she begins to remember what led her to her disoriented state.  Possessed is a rather sudsy (though bleakly filmed), unusual story of Louise (Crawford), in love with a pipeline engineer named David (Van Heflin) who is tired of Louise's smothering affection.  Their weak love affair is kept secret from David's neighbor, Dean Graham (Raymond Massey).  Louise takes care of Graham's invalid wife (shades of Norma Bates here) until her death.  Graham falls in love with Louise; David falls in love with Graham's college-aged daughter (Geraldine Brooks) who is disapproving of Louise.  Louise is both haunted by Graham's dead wife and driven to madness and despair in her unrequited love for David. 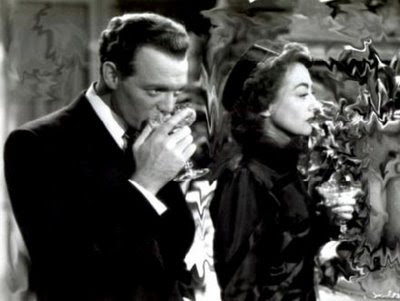 Possessed is often described as film noir--the shadowy and shaky shots mimic Louise's deteriorating mental state.  The camera is a bit more unflattering toward Crawford than it is in her other star vehicles.  In fact, the opening glimpses of her are in distant, overhung shots with her in shadow (vividly done on location; nicely disconcerting and seemingly modern for a big '40s studio pic).  Like the aforementioned Psycho, there's an unfortunate, talky coda where a psychiatrist gives a lengthy explanation of Louise's psychosis.  Yet Bernhardt gives the picture a languid, gloomy air and Crawford is our anchor in a female performance unique for its time. ***