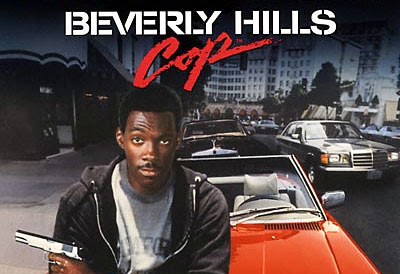 Yesterday I posted a review of undercover-cop-goes-rogue flick Nighthawks with Sylvester Stallone.  1984's hit Beverly Hills Cop is also about an undercover cop and almost starred Stallone.  Thankfully Eddie Murphy was cast, in one of his most memorable roles, as Axel Foley, the perfect choice for the fish-out-of-water tale of a Detroit police detective who goes to Beverly Hills to solve a friend's (James Russo) murder.  Foley stays at a plush hotel (with monogrammed robes), mixes it up with the local officers (Judge Reinhold and John Ashton) and falls into mischief and mishaps while getting closer to unlocking the mystery.

If one looks at Nighthawks and Beverly Hills Cop, it's interesting to see how studio pictures were beginning to change.  Nighthawks came out in that transitional period between the gritty 1970s and early 80s and ended up faring poorly at the box office.  Beverly Hills Cop was a smash and is one of the seminal comedies of the eighties, reigning in the decade's deluge of glossy cop stories like "Miami Vice," with a big budget (though by today's standards quite minimal) and a sleek look. The humor is light, inoffensive (Director Martin Brest resisted racial tinges) and appeals to a wide audience.  The story is satisfying and easily digestible.  Produced by Don Simpson and Jerry Bruckheimer who both understood the marketing possibilities of a strong soundtrack, the music from Beverly Hills Cop is a pretty incredible time capsule of '84 pop. Harold Faltermeyer's infectious synth "Axel F Theme" has become an iconic tune and is used brilliantly throughout the picture. The film opens with Glenn Frey's "The Heat is On" and also features energetic, well-placed songs from The Pointer Sisters, Vanity 6, and Patti LaBelle.  Eddie Murphy is really breezy in the lead role, one of his best performances, and this viewing made me miss his quick-witted, old-school charm.  ***

-Jeffery Berg
Posted by MrJeffery at 10:37 AM