it came alive and took him 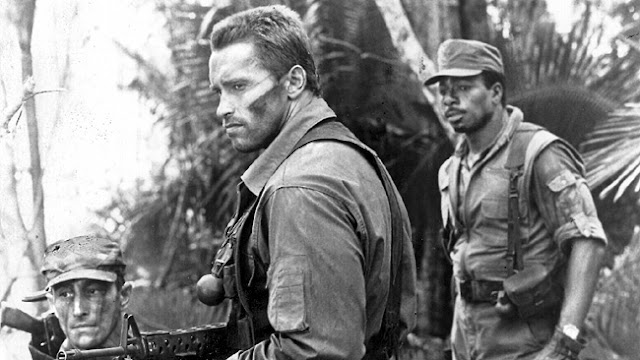 In a Central American jungle, Dutch (Arnold Schwarzenegger) and his elite team are dispatched to rescue hostages from a guerrilla operation.  In King Kong-fashion, the men get much more than they bargained for, when they are preyed upon by a fierce, technologically-advanced extraterrestrial beast.

John McTiernan, who would later direct action smashes Die Hard and The Hunt for Red October, keeps Predator fueled with noise, gore, sweat and lots of guns. It's a post-Vietnam era pic with Vietnam undertones. A mix of Alien and the stalker-vibe of Friday the 13th, Predator is an entertaining, albeit meagerly-plotted, sci-fi horror pic that defines the testosterone-pumped 80s action flick. A box office smash, it would also go own to spawn numerous sequels, copycats, and remakes.  Carl Weathers as a CIA operative and the dramatic score by Alan Silverstri with its bellowing horns and hard-hitting percussive beats are best in show.  Also worth note are Stan Winston's creature effects, which still look pretty effective today.  Hard to believe that two guys in this would later become US governors (!) (Schwarzenegger and Jesse Ventura... who delivers the movie's most memorably crude line).  Schwarzenegger is a dreadful actor, particularly here, but who cares really, I guess.  ***