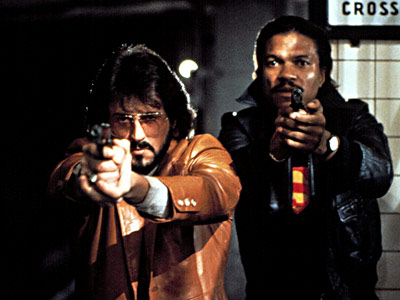 In Nighthawks, terrorist Wulfgar (Rutger Hauer, in an early film role) wreaks havoc upon New York City while pursued by former undercover cops Deke (Sylvester Stallone with some mad foxy facial hair) and Matthew (Billy Dee Williams).  The movie establishes Wulfgar as extraordinarily cold-blooded and crafty as he blows up a London department store in an early scene.  Meanwhile Deke and Matthew are selected for an Anti Terrorist Action Command (A.T.A.C.) with the charismatic and elusive Wulfgar as their main target.

This is a pretty fun, schlocky movie with lots of on-location NYC scenes. The most riveting is aUnited Nations hostage situation aboard the Roosevelt Island tram.  For additional entertainment, there's also Stallone in really terrible drag (!) and a groovy disco shootout set to the Rolling Stones' "Brown Sugar."

The movie was originally planned as French Connection III in the mid-70s but plans for that fell through.  Directed and written by Bruce Malmuth, Nighthawks doesn't leave much for introspection and it's no French Connection, but it's a fast-moving (especially once the chase is on) action pic up until the wacky finale.  Stallone is pretty subdued in the lead role and Hauer is quietly menacing as his foil.  Well-edited and photographed (by James A. Contner who lensed Crusing), the grimy urban look and the glimmering clubs of bygone, early 80s NYC is a sight to behold as well.  ***
Posted by MrJeffery at 7:48 AM