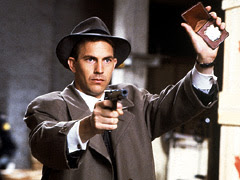 Brian De Palma (Carrie, Scarface) sure has made an array of dynamic, visually-affecting films.  The Untouchables is a grand popcorn movie about the nabbing of Al Capone (Robert DeNiro) and his inner circle during the Prohibition era by a ragtag group of officers led by agent Eliot Ness (Kevin Costner).

The film, photographed by Stephen H. Burum, employs many of De Palma's signature visual touches--low angles, canted angles and tracking shots.  The violence is stylishly captured and alluring.  There's a sort of emotional distance De Palma's elaborate set pieces and stylistic choices sometimes create but there's a good cast to help ground things notably Kevin Costner, Patricia Clarkson as Ness' wife, Andy Garcia and Charles Martin Smith.  This is Costner's first breakout role in a smash movie but his performance feels so comfortable and effortless here.  There is some scenery-chewing too from DeNiro and Sean Connery who won the Supporting Actor Academy Award (I preferred Albert Brooks in Broadcast News that year) for his showy turn as veteran cop Jim Malone (ponderous Irish accent and everything).  Ennio Morricone lends another incredibly lucid, exciting score here that alternates between a somber, full-bodied romantic theme and stabs of percussion and strings.  The script by Chicago-bred David Mamet can be a bit all over the place and from what I understand, historically inaccurate, but it all comes together in the crowd-pleasing finale and with its memorably cheeky last line.  ***