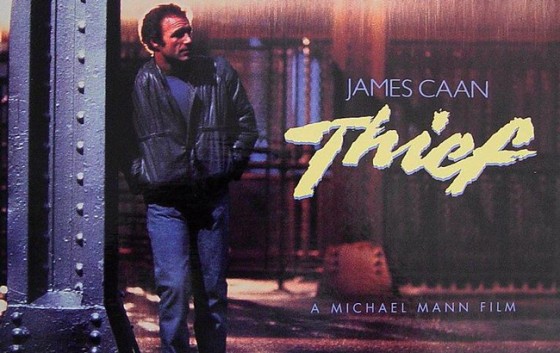 The 1981 crime thriller Thief  is rather unremarkable plot and script-wise but is notable for its influential style on neo-noirs (including last year's Drive... just look no further than comparing the font for the title of each film on their respective posters) and for being director Michael Mann's debut.  Mann would later be known as an auteur of classy crime pictures such as Heat, The Insider and Collateral.  In Thief, you can see what would later be trademarks of Mann's work: night scenes with bluish, shadowy lighting and flawed male antiheroes trying to work themselves out of corrupt systems.  James Caan plays Frank, a professional safecracker and ex-convict with dreams of settling into a normal life.  After one of his co-horts is killed, he is soon involved with the mafia, working for Chicago Outfit boss Leo (a sinister Robert Prosky). Meanwhile Frank tries to appeal to his girlfriend (Tuesday Weld) by wanting to start a family.

The good cast (including a convincing appearance by Willie Nelson as Frank's old friend from prison) and Mann's stylistic concerns (including the moody synth soundscape by Tangerine Dream) make Thief  an above-average mob movie, even if you feel you've seen it before. Thief is filmed with a gloomy elegance by Donald E. Thorin.  There's good tension in the pic too; Mann has a way of making things uneasy in the quietness (the final showdown is pretty great).  Besides the neon beer sign-lit streets, close-ups of guns and authentic safecracking materials, there are some great moments which utilize POV and a feel for character, notably a shot with Prosky menacingly looking down on us.   ***
Posted by MrJeffery at 5:05 PM