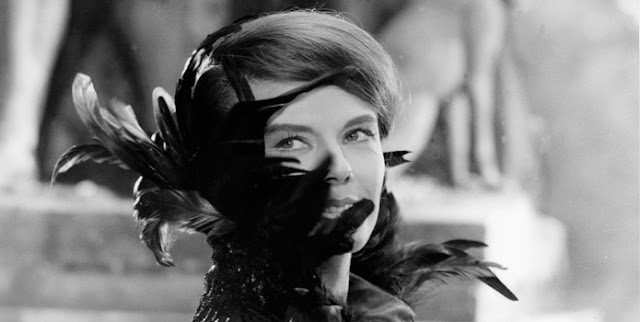 In an ethereal, baroque trompe-l'oeil hotel (or château?), a man (in the screenplay referred to as "X," portrayed by Giorgio Albertazzi) attempts to convince a woman ("A"; Delphine Seyrig)--who insists that he is a stranger to her--that they once had an affair.  Meanwhile a man ("M"; Sacha Pitoëff), who seems to be the woman's husband, is constantly interrupting "X" and "A" and asserting his dominance over "X" by repeatedly beating him in mathematical games.

Last Year at Marienbad is an eerie, mysterious film with long tracking shots and organ dirges.  Though the film contradicts itself--actions repeated and changing in ways that aren't linear--the moody atmosphere is continuous. We have lush things to look at, perhaps to distract us from the shifting and ambiguous storyline.  The Marienbad setting almost feels like an ornate mausoleum, with elegantly-dressed guests sometimes frozen in poses of whatever dream-time moment the film takes place in. One can see its influence on Stanley Kubrick, particularly the hotel in The Shining, and its maze-like grounds of perfectly-manicured shrubbery and statues (the careful viewer will notice that these items do not cast shadows but that the people there do).  To add to its puzzle-esque nature, is the film's haunting narration; I loved the journey through the corridors and X's terse, poetic listing of objects ("Empty salons. Corridors. Salons. Doors. Doors. Salons. Empty chairs, deep armchairs, thick carpets. Heavy hangings. Stairs, steps. Steps, one after the other. Glass objects, objects still intact, empty glasses. A glass that falls, three, two, one, zero. Glass partition, letters."). 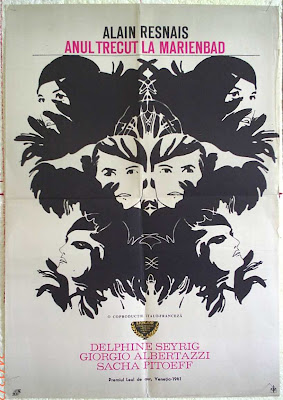 Alain Resnais and Alain Robbe-Grillet haven't really shed light on the logistics of the movie, for those looking for it, though there have been many interpretations (the myth of Orpheus and Eurydice; that it takes place in the mind of A rather than X; that it's a film of characters in limbo).  I wasn't as invested in unlocking clues as I was seduced by the atmosphere, the photography (by Sacha Vierny), and Seyrig's Chanel.  Robbe-Grillet, in the intro to his screenplay has said, "Two attitudes are then possible: either the spectator will try to reconstitute some 'Cartesian' scheme - the most linear, the most rational he can devise--and this spectator will certainly find the film difficult if not incomprehensible; or else the spectator will let himself be carried along by the extraordinary images in front of him ... and to this spectator, the film will seem the easiest he has ever seen: a film addressed exclusively to his sensibility, to his faculties of sight, hearing, feeling." Marienbad didn't hit me emotionally as Resnais's previous Hiroshima, Mon Amour did, but I can see how it was an important piece of cinema, and its effect on the work of many contemporary directors.  Marienbad feels like a mathematical game with characters like integers and no solutions except to make the audience ponder away.  How do we preserve memory? How do we re-create it?  ***1/2


-Jeffery Berg
Posted by MrJeffery at 8:40 AM