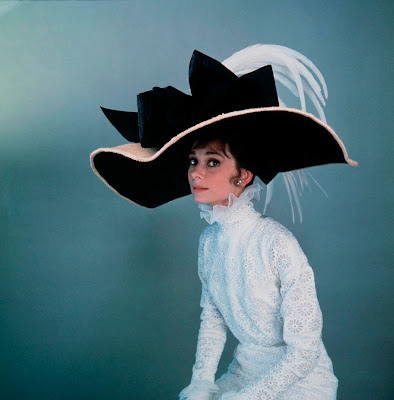 The most impressive aspects of George Cukor's grand old Warner Brothers 1964 musical My Fair Lady are the immense but intricate sets, the indelible music (adapted from Alan Jay Lerner and Frederick Loewe's Broadway hit), and Cecil Beaton's lavish Academy Award-winning costumes and magnanimous hats.  Eliza Doolittle (Audrey Hepburn) is a brash, naive Cockney flower girl who is groomed and taught speech lessons by phonetician Professor Henry Higgins.  This much beloved film hasn't really dated well--it's overlong, Rex Harrison's priggish Mr. Higgins is nearly unbearable (nevertheless Harrison won the Oscar) and lovely Audrey Hepburn's performance is at times unsteady (and sort of annoying) as she puts upon a Cockney accent and lip syncs for her life (to her dismay, the studio chose to dub her vocals by Marni Nixon).  Neither performer has the seemingly effortless grace and thespian skill of Leslie Howard and Wendy Hiller who played George Bernard Shaw's Higgins and Eliza Doolittle in Pygmalion.  It's interesting how Pygmalion was filmed over thirty years prior to Lady but seems more modern, more complex and savagely satirical in comparison (I wasn't a fan of Lady's changed ending from Shaw's source material).  Yet it's hard not to resist My Fair Lady and its music and big-budget 1960s Hollywood appeal. Besides winning Oscars for Best Picture, Cukor's direction, Harrison, its warmly-lit cinematography, Costume Design, and Sound (besides the dubbing, many smoothly-handled tricks are done here), the picture also won for Art Direction (credited to Gene Allen, Beaton, George James Hopkins).  There's such beautiful attention to detail from the title cards of flowers to the moldings, the columns, posts, swinging gates, gilded lattice work and the Covent Garden cobblestones--individually crafted and designed.

The most breathtaking moment (and ultimately symbolic) for me is the Ascot Racecourse scene with its spectacular costumes and vocal harmonies. There's something eerie too in watching these upper crust characters as shallow, stiff mannequins, wrapped in black & white satin and silk.  Another highlight is the embassy dance ball where Doolittle is shown off in her iconic bouffant hairdo with a glimmering little crown, necklace and simple beaded white gown.  The middle of the picture becomes more resonant as Doolittle slowly realizes she is merely Higgins' show pony.

Perhaps because this isn't musical of dance, it comes off a bit stodgy at times, and it's clearly meant for the big screen, yet My Fair Lady is an essential, sometimes exquisite relic of bloated, dazzlingly hand-crafted Hollywood epics that would eventually fade within the changing mores of sixties cinema.  One of the era's seminal events even occurred while filming "Wouldn't It Be Loverly," when Hepburn got word of JFK's assassination. She announced his passing to the crew and requested a moment of silence; then they all walked off the set and went home.  *** 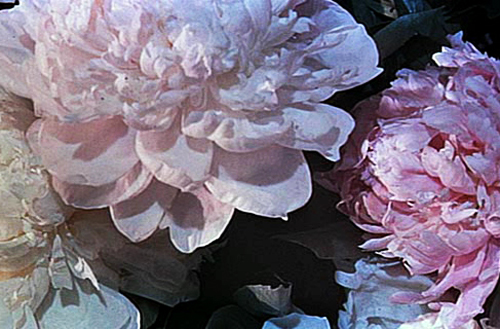