Brian, from one of my favorite film blogs Rupert Pupkin Speaks, offers up a groovy list of his favorite underrated films of the 1960s.


The 60s is not necessarily my favorite period for films, but there are a lot of classics that emerged in that era nonetheless. As with any decade, some films slip through the cracks and almost disappear. Here are a few of my favorite 60s "crack-slippers." 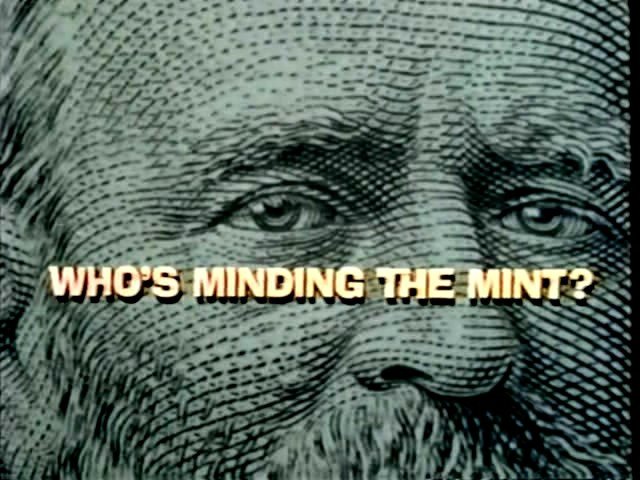 On paper, it doesn't necessarily feel like I should enjoy this movie as much as I do. First off, it's in the vein of IT'S A MAD MAD MAD MAD WORLD, which is a "classic" of the 1960s that I pretty much hate. Anyway, somehow this thing charms me. Jim Hutton plays a mint worker who accidentally destroys a bunch of money and then gets into some serious wackiness trying to replace it. This all-star comedy cast includes Milton Berle, Bob Denver, Walter Brennan, Joey Bishop, Jack Gildford, Jamie Farr and the lovely Ms. Dorothy Provine. I was very excited when this finally arrived on Sony MOD a while back. 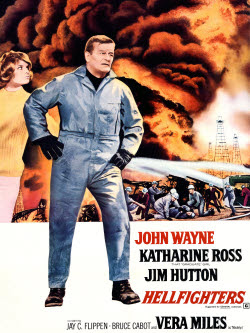 HELLFIGHTERS (1968; Andrew V. McLaglen)
I just have a soft spot for this one. It's a little silly, but I kind of love it. John Wayne and Jim Hutton (again!) star as Firefighters who fight Oil fires. As such they are kinda rock stars. They fly all over the world (on they're own jets and helicopters , have amazing "pads" and Hutton especially really draws the ladies. Wayne also meets his estranged daughter (played by a GRADUATE-fresh Katherine Ross) and things go wonky from there. Good times though. Also has Vera Miles, Jay C. Flippen and Bruce Cabot. I like this kind of later period Wayne. 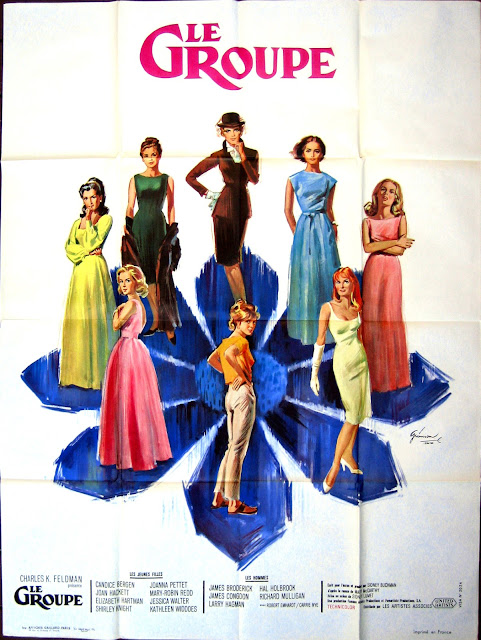 THE GROUP (1966; Sidney Lumet)
This one is absolutely recommended for fans of epic soap operas. It follows the lives of 8 upper class private school girls in 1933 after graduation and their inevitable declines(most of them). Has a touch of camp to it which makes it pretty entertaining to me. Almost all the men in the film are complete dicks. Cast is a real barnburner: Candice Bergen, Joan Hackett, Shirley Knight, Jessica Walter, Larry Hagman, Hal Holbrook & Richard Mulligan. On Netflix Instant right now. 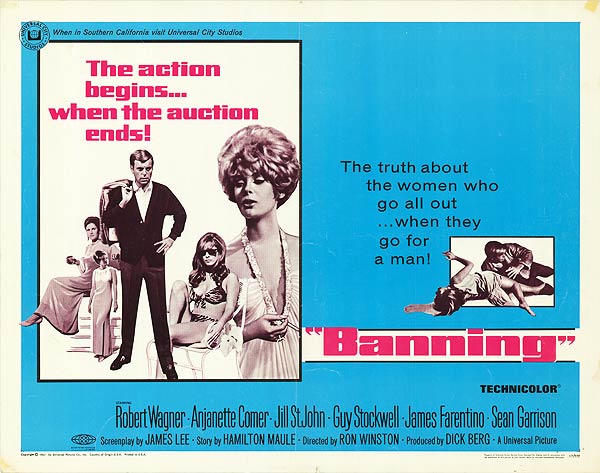 BANNING (1967; Ron Winston)
A down-on-his-luck playboy golf pro (Robert Wagner) is kicked off the circuit for alleged cheating is forced to hustle for a living. He has been hopping from Country Club to Country Club uses his skills to hustle the golfers and the ladies while trying to stay one step ahead of an loan shark he owes money to. More camp to be found here as hard boiled language is exchanged on a around the golf courses. I call this a "Golf Noir" and there should have been more of them. I just discovered this film last year and it has already become one of my most wanted titles on DVD. It's only gotten a VHS release to this point and the transfer obviously doesn't do it justice, especially cause it was filmed in 2.35 to 1 Techniscope. Really hoping Universal puts this out as an MOD dvd or at least streams it widescreen at some point. Currently P&S on youtube at least. 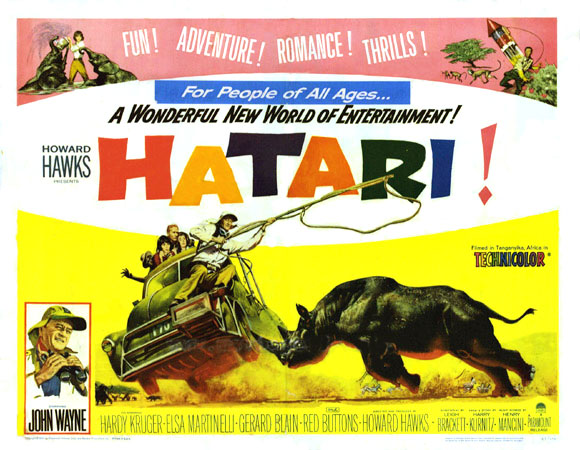 This film is a bit underrated in terms of Hawks' output and in revisiting it recently (on Amazon Instant in HD) I came to appreciate it a bit more. This tale of the men who trap wild animals in Africa to sell them to zoos has all of Hawks regular thematic tropes(professionalism, redemption etc). It also has a lot of very similar romantic situations to RIO BRAVO which always makes me chuckle (even though the gals in this film can't compare to Angie Dickinson on any level). I say come for Wayne, Red Buttons, Hardy Krueger and the stay for the breathtaking action/animal sequences. Also stars Bruce Cabot, so a nice double with HELLFIGHTERS.
Posted by MrJeffery at 12:11 PM