"you're a born loser" 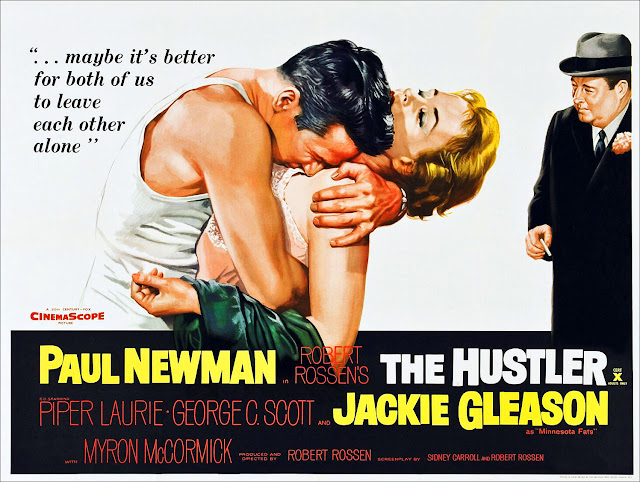 Paul Newman was such a great actor!  That was my main takeaway from watching The Hustler--Robert Rossen's black & white, bleak cue ball yarn from 1961.  Newman plays "Fast Eddie" Felson, a small-time pool hall hustler who travels cross-country to play legendary "Minnesota Fats" (Jackie Gleason, slick and sly, perfectly capturing some dark undertones).  After initially losing to "Fats," Eddie meets with Sarah Packard (Piper Laurie), a lonesome alcoholic with a polio-afflicted limp.  Trying to score some money with hopes to challenge "Fats" again, Eddie gets more than he bargained for when he goes to the Kentucky Derby to play a wealthy Louisville socialite Findley (Murray Hamilton). 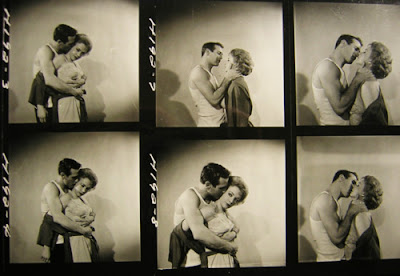 Perhaps because I'd (unwisely) seen Martin Scorsese's flashy sequel The Color of Money beforehand, The Hustler isn't the brisk, suspenseful film I thought it would be.  Instead, Rossen's film is doleful (with its intermittent melancholy, oboe-laced score by Kenyon Hopkins), tracing the continuous struggles (the wins are never sweet) of Eddie and his dour, unsatisfying but burning relationship with Sarah. The actors in the picture in parts big and small, are all poignant.  Piper Laurie, with her limp and big sad eyes, is such a fascinating actress and very much immersed in her character here. I like that she's not a typical Hollywood beauty of the era. There's one scene where she's on the floor, drunkenly hunt-pecking a story out on a typewriter, that's quite odd and unforgettable.  The love affair between her and Eddie makes sense--it doesn't seem to be a passion out of lust or physical attraction (those sensual promo shots and the one on the film's poster are misleading) but a woeful companionship of understanding each other's similar demons.  I can't imagine The Hustler without Paul Newman, who once again shows his range as an actor.  His performances from the 1960s are among the best work of any actor in film history and here he shows both dramatic rage and laconic desperation.  Adapted from a 1959 novel by Walter Tevis, this is a film about winners and losers and the way they win and lose with quiet contemptuousness.  It's sometimes difficult to discern the honesty of the movie's characters, particularly professional gambler Bert Gordon (George C. Scott) who sets Eddie up with some of the matches.  I think the pool game scenes were likely harder to shoot than they appear.  The flick was cut by legendary editor Dede Allen whose slightly offbeat rhythmic sense was ahead of its time for American pics here and would later earn her acclaim for iconic 70s movies like Serpico and Dog Day Afternoon.  Eugen Schüfftan won an Academy Award for his cinematography.  The choice to shoot it in soft black & white gives it jazzy elegance but also lends a beat to its sad heart.  ***