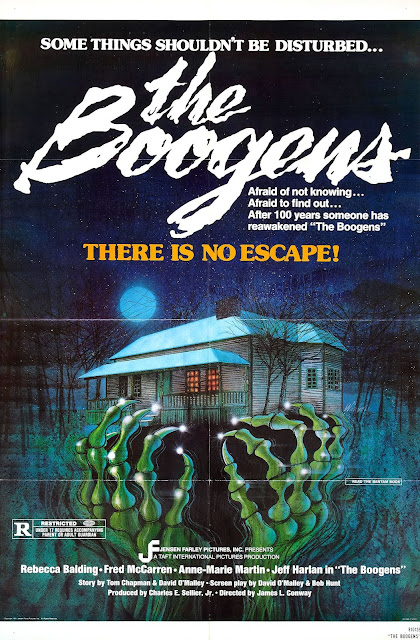 Even if it's set at a super slow pace and it didn't really scare the boogens out of me, I enjoyed The Boogens.  A mysterious, murderous creature is set loose after the re-opening of a mine.  This film is inspired by 1950s monster movies.  It isn't "wildly energetic" as Stephen King described it, but has that genuine, slightly goofy, appealing 80s VHS aura.  The latest blu ray transfer is beautiful, with an excellent commentary track by Director James L. Conway, actress Rebecca Balding (the two are now husband and wife; Balding appeared previously in Silent Scream with some major sunnies) and screenwriter David O'Malley.  Shot for only $600K in Utah in February, The Boogens makes good use of the chilly locations and a nicely crafted cabin-in-the-woods set.  The orchestral score by Bob Summers, is surprisingly accomplished and lush for low budget horror.  The monster is pretty fun too, though we don't get to see him much in the beginning (in the fashion of Jaws).  He's sort of a mix of a rodent and a roach.  Pretty gross and fun effects ensue in the finale.  I also appreciated the scene where he pokes his long nails through the radiator grill.  The Brichon Frise delivers a strong performance as the frequently elusive pooch in peril. **1/2

Posted by MrJeffery at 4:57 PM