2017 has offered a bevy of rich films and also movies with interesting--mostly ironic, but sometimes sincere--source song choice uses. Here are a few of my favorites. Spotify playlist here. 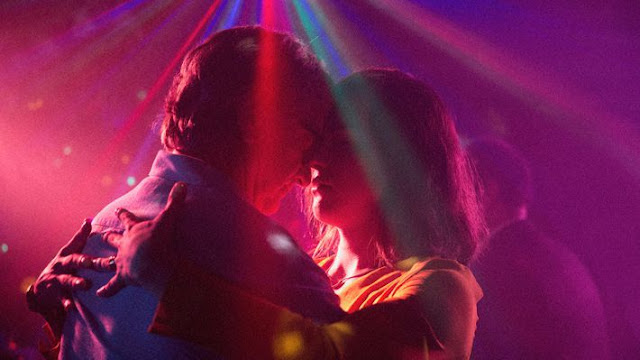 In A Fantastic Woman, this tune by Alan Parsons Project with vocals by Eric Woolfson imbues a couple's final disco light lit slow dance (and also the final credits) with a melancholic poignancy. 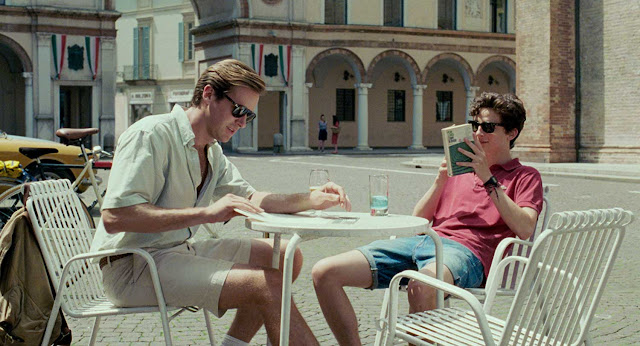 Of course the Sufjan Stevens' original songs and Psychedelic Furs' "Love My Way" both express inner joy and deep ache in Call Me By Your Name. But I particularly loved the appropriately-chosen Euro-disco numbers by Joe Esposito & Giorgio Moroder and F.R. David which like the film, feel deeply rooted in another time. 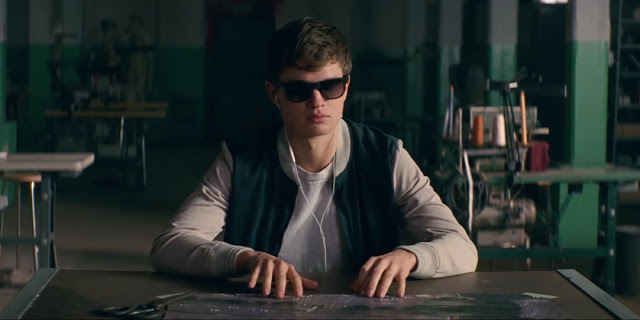 The slick Baby Driver is chock full of the title character's playlist tunes and his encyclopedic retro music knowledge that mimic the film's staccato rhythms and occasional gore. Dave Brubeck's "Unsquare Dance" is a simultaneously hip, snappy ditty emblematic of the picture. 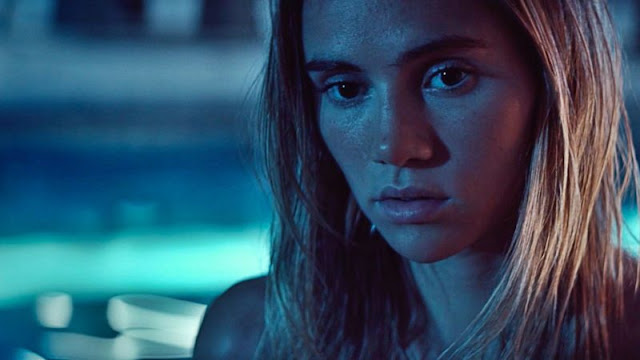 "Screws in My Head"

As evidenced in her debut, director Ana Lily Amirpour's keen ear for soundtracking returned with The Bad Batch. Loved this use of this hypnotizing black light smoke track in particular which conjures images of the ragtag souls of "Comfort" raving in blue-tinged darkness. 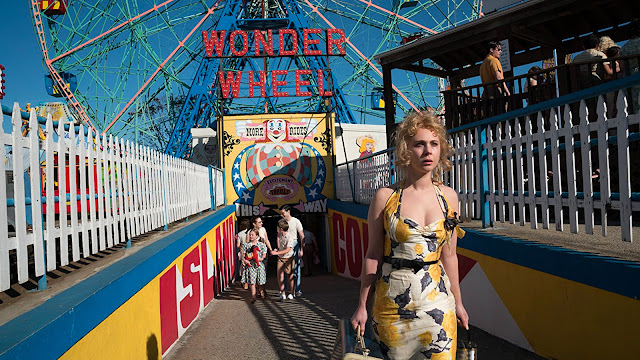 
The scratchy Victrola vibe of the Mills Brothers' "Coney Island Washboard" encapsulates the vintage feel and setting of Woody Allen's Wonder Wheel, but the slaphappy lyrics' portrait of a woman are in dissonance with the main character's (played by Kate Winslet) trapped existence. 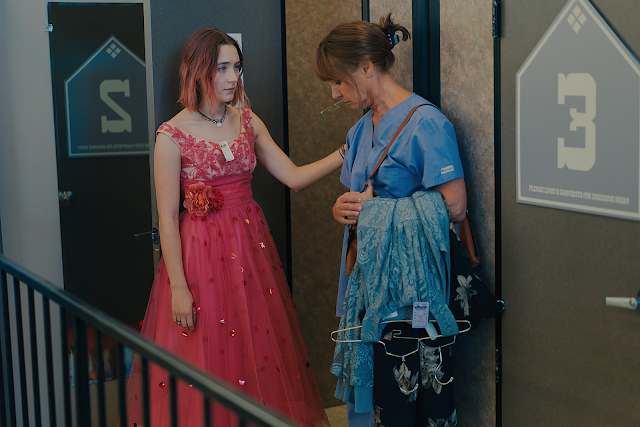 For those who remember the early aughts in America, "Crash Into Me" by Dave Matthews Band was a late 90s number that continued to thrive as a well-worn stone on FM radio into the 2000s. Rare that such an overexposed, kind of cheesy track can work so well and movingly as it did in Lady Bird.

Also fitting was the use of Justin Timberlake's barn-burner in a high school party scene. Director Greta Gerwig shared her humorous letter to Justin calling the song “sultry and sullen and infectious" and comparing it to the Rolling Stones' "Gimme Shelter." Director Sean Baker on his exquisite use of the Kool & the Gang anthem in the opening credits of The Florida Project.

"It was definitely something I was conscious of, but I don’t remember when I chose that song. It was close to production, but it was definitely in the screenplay, because I knew I would have the title sequence play that song on the purple wall. There are so many contradictions and juxtapositions in that world, I wanted to be setting the audience up to a certain degree. That whole city and the county is all there because of the parks, it’s all about celebration – there’s literally a town called Celebration next door. When you think of being on the main street of Disney World, you think of a celebration. It’s all about that, but right in the shadows of it, there are things that are far from celebratory. At the same time, in a kid’s life, summers are celebratory. I’m just playing with the contradiction, the irony, but not for cynical reasons..." -Sean Baker 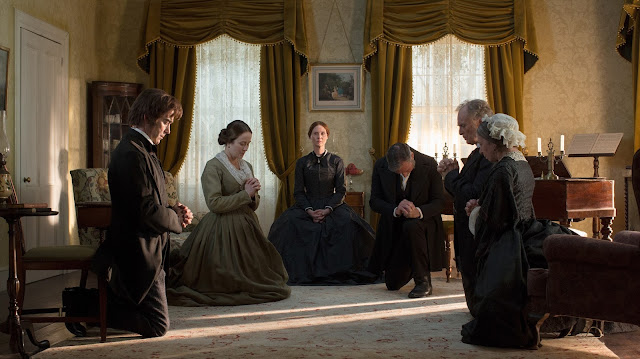 This masterwork by composer Charles Ives, which has been used in films many times before, accompanies Cynthia Nixon's voice-over of Dickinson's poetry in the simultaneously devastating and celebratory final scenes of Terence Davies' beautiful film A Quiet Passion.


"...the closing sequence....I thought, "It needs something, it just needs something." And then I remembered those pieces by Charles Ives, particularly "The Unanswered Question." It's got interpolations for woodwinds. I said, "When we record it, could we take them out?" It sounds very mysterious, like it doesn't quite know where's it going. And that scene really arrived when we took out the interpolations." -Terence Davies 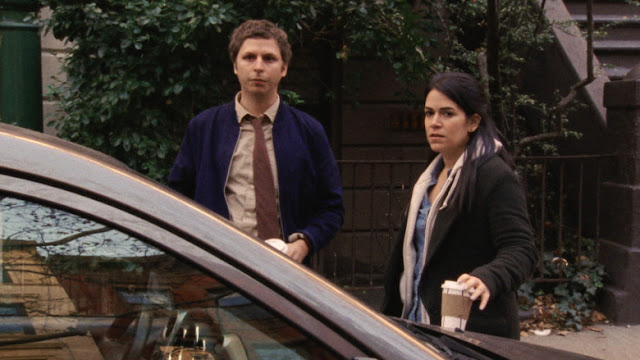 Dustin Guy Defa's lithe, good-natured ensemble comedy Person to Person has a wide array of music on its soundtrack including Charlie Parker and a fictional heavy metal band that ends on a breezy high with Redbone's "One More Time."


A triptych of cryptic of music opens Get Out: a simultaneously chilling and amusing use of "Run Rabbit Run" and not Redbone the band, but "Redbone," the Childish Gambino single (recently nominated for Record the Year by the Grammys), plays over the opening credits of Get Out. It's an interesting choice too because these two songs are bookends of the film's stirring theme music by Michael Abels (an eight person choir sings phrases such as "run," "listen to the truth" and "save yourself" in Swahili).

And the Oscar-winning Dirty Dancing song figures in one of the movie's best sight gags.

"I love the ‘Stay Woke’ [lyric] — that’s what this movie is about. I wanted to make sure that this movie satisfied the black horror movie audience’s need for characters to be smart and do things that intelligent, observant people would do... It’s a little haunting too, and a little bit of a throwback as well—like this film is—so it’s a perfect match." -Jordan Peele

In line with its retro-affection and tongue-in-cheek lightheartedness, Guardians delivered another ebullient batch of tunes in the sequel. The "Mr. Blue Sky" opener zings as does the piano-rolling Aliotta Haynes Jeremiah tune "Lake Shore Drive." But I loved the conga drummed-"Come A Little Bit Closer" fight song usage.

I was moved when one of the subjects, whom we get to know breezily but in deeply emotional ways, of the Maysles' Amtrack-set In Transit flicks on this 2Pac song which is filtered through cloudy feedback. 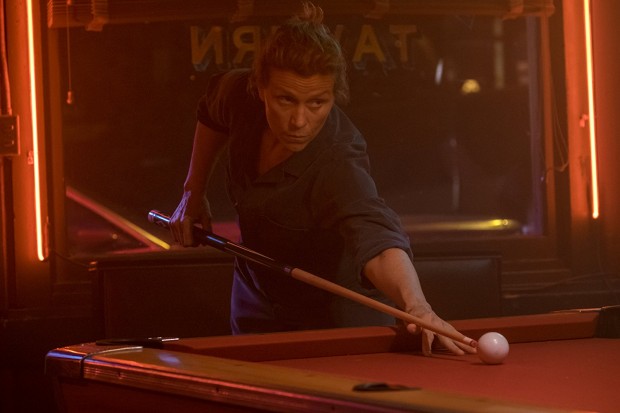 Perfect bar jukebox fodder and a song of loneliness, weariness, and defiance (can it also be a song, as the title suggests, of letting-go?), the Four Tops version worked well in both in the trailer for and within the Three Billboards Outside Ebbing, Missouri where "anger begets more anger."

Posted by MrJeffery at 1:04 PM

Email ThisBlogThis!Share to TwitterShare to FacebookShare to Pinterest
Labels: a fantastic woman, a quiet passion, alan parsons project, baby driver, call me by your name, celebration, get out, Giorgio Moroder, lady bird, person to person, the bad batch, the florida project, wonder wheel