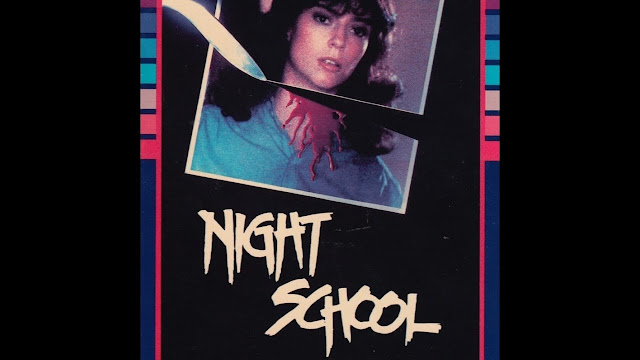 I was impressed by 1981's Boston-set whodunit slasher Night School on a aesthetic level much more than I thought I would be. The film, edited by Robert Reitano, is rife with sophisticated, slightly tongue-in-cheek cuts: a shot of a shower drain to a diver feeding fish in an aquarium, and later a cut to a turtle nibbling at a severed head. With no particular reason symbolically, water is a motif throughout--from the aquarium to a shower scene to a diner kitchen sink. At the time, Ken Hughes had long been writing and directing a diverse array of films--from noir to Chitty Chitty Bang Bang. This could be one reason why which may be why Night School stands out from younger-directed horror flicks of the era. The use of sound is jarring in a good way--from the racket of a blade against metal to the mechanic whirring of a coffin being laid into the ground. Brad Fiedel's (The Terminator) score features a lovely, melancholy string strain paired with bubbling, menacing synths. But the silences are effective as well. The chase scenes are tense--Rachel Ward's panicked flee is convincing. The killer dons sleek, Daft Punk get up and orchestrates some pretty gruesome, elaborately planned beheading sequences sometimes with savage slow-mo. 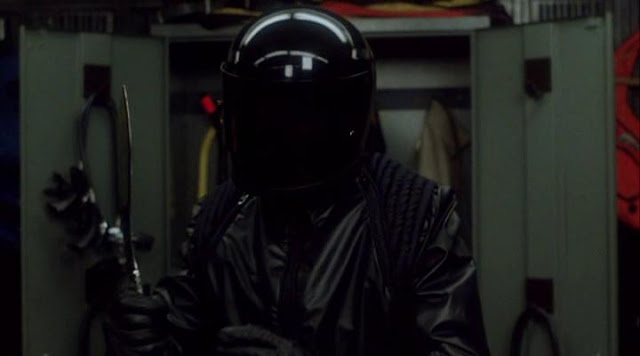 The film seems to have an inherent contempt for higher education--the smug professor in his cream colored weaved sweater. Early on, our Ivy League-brandished investigator Judd (played by Leonard Mann) jokes about his own education. The police that surround him--"Bawston" cop chomping sandwiches with notepads kind of types is a contrast to Mann's demure performance, standing tall and rail thin with a mop of black hair, blazer, hands in pockets. The movie also illustrates class divisions in Boston: the diner waitress and one key suspect who lives in a ramshackle apartment (a "Jason" hockey mask appears, two years prior to Jason taking the mask on) as a peeping tom.

Night School is quite fun (it breezes by!) and one I look forward to reading more about; I would also give this another watch to discover more of the layers it likely contains. ***

Posted by MrJeffery at 6:28 PM