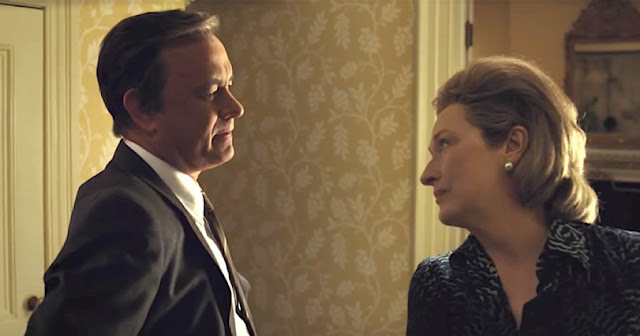 The overall feel of Steven Spielberg's entertaining The Post is a see-saw with one person on one end and no one on the other. Unlike Lincoln, which was precisely paced, this is an unbalanced picture, with vivid, wonkish details of the first and middle halves not quite delivering the goods in the finale. This could be due to Spielberg's dash to get the film made at this particular moment in America, but it also encapsulates, in a way, the sense of journalism itself--with the build of research and sources and interviews and blustery walks across the newsroom to an ultimately fleeting conclusion (there are some shots of wind-blown newspapers that are almost elegiac). The movie is shaped around its leads, Meryl Streep and Tom Hanks, as characters on the precipice and within the short aftermath of publishing the Pentagon Papers in The Washington Post. While a younger Spielberg may have made Katharine Graham and Ben Bradlee rosier and uncomplicated, the post-Lincoln Spielberg, along with Liz Hannah and Josh Singer's (Spotlight) snappy script, delves into Graham and Bradlee's cushiness with past Presidents and Robert McNamara himself. Spielberg portrays competitive capitalism as American as a lemonade stand with shares, profits, and beating rivals to the punch as much of the reasons why the Papers were hounded after in the first place. In some ways, one could construe a glimmer of Graham's eventual actions, as is also often the goal of many American historical pictures, to absolve oneself of guilt but her power is also rooted in her compassion. 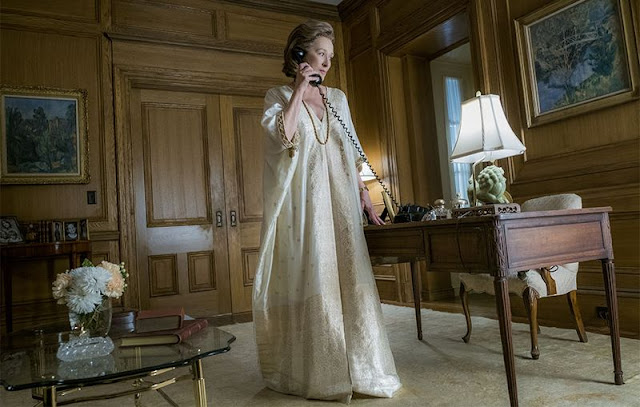 Spielberg's supple manipulation and craftsmanship still can lead an audience to applause and / or tears.  His seasoned crew, including editors Michael Khan and Sarah Broshar, production designer Rick Carter and composer John Williams (one of his more unshowy, least remarkable scores, but one that works well as the cement holding it all together), all aide in Spielberg's savviness. Ann Roth's costumes, which floats out a soon-to-be-iconic caftan, are a dreamy set. I was mixed on Janusz Kaminski's cinematography which is both sort of muddy and gilded lily--figures edged with soft lamp light and sunlight; I felt sometimes I was sharing Graham's bad eyesight. Streep and Hanks who have had incredibly enduring careers are both excellent, charismatic, and fun to watch--at times, you can feel their characters' stress; it's strange that their combined on-screen chemistry hasn't been exploited before. There's also a good supporting ensemble scattered with the Spielbergian trope of doofusy guys and an especially slick turn by Bob Odenkirk. 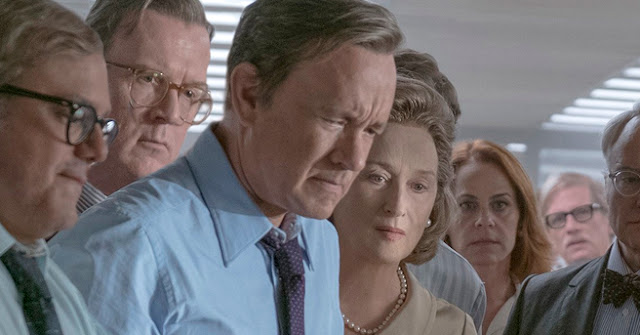 In the ending of this year's I, Tonya, we are reminded how the media will pile on top of the past with  the next new thing. I am still intrigued somewhat with The Post's ending, its obvious coding of the moment in a sort of horror movie setup-for-a-sequel final note (a poster for The Blob is glimpsed in the opening, a movie that ended itself in the arctic with a loopy white question mark). It's a sly, devilish ending but also a hopeful one (a smattering of claps went through my audience)--a combination of notes that I don't think I've seen a Spielberg movie end on before. ***

Posted by MrJeffery at 4:13 PM