Inside the Grotesquery, a Fantasmic Neglect


A little girl screams behind the castle.
Shhh a cricket hears
with its front legs. Once upon a time
everything above the sky
was water. Maybe in the bibbidi
kind was kinder. I'm storybooking
in threes, aren't you? I sell this
for a living. I called the preferred agent line
and got Perdita. No cigarette butts
in the parks like a million dead
stellar cores. I weld this
for the giving. The smell of citrus
wafts like noblesse oblige back to a simpler,
rounder time. Do not resuscitate.
Either Eeyore, or the illusion.
Sorcerer Mickey can control the stars and comets.
Mickey can't.
We have this grief
in common.
A grandma shouldn't squeeze
into a trundle but
she'll try, she'll try.
People are cheap
and terrible. I've been known to exclaim
"Royal Table is the most important meal of all!"
If you wear your own costume please refrain
from signing autographs. Leave that to the real.
The summer I turned 19 I pulled order
tickets from a printer, served mouse-shaped
pizzas, wore purple polyester. Mark
in Maintenance asked to meet me
at the Polynesian. I'd only ever kissed.
I waited in a hammock.
The stars unlatched,
one by one. I've been offered
the survey hundreds of times. I'm afraid
I'm still on hold. Take back
this tiara. I want to be
Pizarro, dreaming
of Peru before he found it.

Rebecca's chapbook of poems, Greener, was released from Finishing Line Press in 2009. Recently, she has four poems in Cream City Review, and a poem in the Southern Poetry Anthology: Georgia. She is currently at work on a collection of non-fiction essays called "From Soho to Silo" about, among other things, life as a travel consultant and her attempt to contact an incarcerated North Georgia murderer who shares her name. She blogs at FromSohotoSilo.blogspot.com and lives in Athens with her husband and tuxedo cat Snickers. 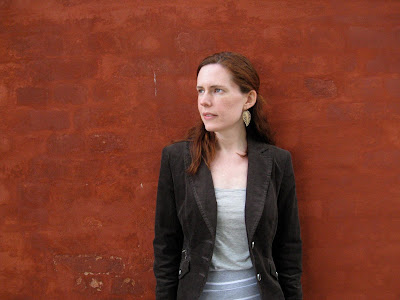 Posted by MrJeffery at 6:33 AM