Just like you had no conscience, no self-
fulfilling doomsday prophecies, no falsetto

twitter outside the adolescence birdhouse,
you Shirley-Templed across the island

without a shirt on. Just like a cowboy
in pajamas, Tony Perkins made a habit

out of bed sheets, turned up in the shower
at peculiar moments. You often said

whimsical nothings. Nine times out of ten,
said nothing. How Cinemascope, your life,

when every Natalie Wood could stand in
for love, when every horse bought for you

a kingdom. And you! Living in a stable
with Peter Lorre and Daffy Duck? Oh,

in those days the Soviets shot their dogs
into orbit. Everything was easy. Thereafter

Democrats took office, and magazines quit
publishing your photos. Just like the boy

next door quit shaving. And we stood around
transfixed by his sister’s burning

Messiah, you came back in Polyester.
Like a Baptist, you taught us to love Divine.


As a fifteen-year-old, I went to sock hops
dressed for combat; Vietnam-era
jungle boots; my father’s nuclear submarine jacket,
a radiation warning stenciled on the back—

the same symbol that marked the fall-out shelter
under the gym in which we danced.
I felt like the subject of punk rock royalty, satisfied
letting The Clash ask big questions for me:
Exactly who am I supposed to be? they sneered
as my friends and I yelled, “Spaz!”
dropped to the floor and squirmed like victims
of a latter day Cold War attack.

The media called us “Generation X,”
as if we were done for before we started, or else
we marked the spot, the crossroads
where you deal with soft-handed strangers
you’d rather not claim as friends.

We went on worshiping the devil in decibels
as loud as our eardrums could handle, praised
chord and discord, kept the beat
like Anglo-Saxons going berserk on Rome

until we realized we were the Romans.
We couldn’t spend the rest of our lives
hitting the deck
in joyous manifestation of all the destruction
our country had wrought on the world, celebrating
our own premature demise.

But still, my pulse quickens
when I hear The Sex Pistols shouting
no future
above a hyperactive surf guitar.

And I clearly remember lying on the varnished floor
believing anarchy was coming our way
as we surrendered our bodies, each of us losing it
like an epileptic Caesar, thrashing

even as the DJ turned to pop music
and girls tiptoed onto the dance floor, careful
not to trip on our writhing bodies, swearing
all they wanted was fun, a new world
where we could stand to live.

John Wesley Horton co-directs the University of Washington's summer creative writing program in Rome. He usually lives in Seattle but he's currently tapping maple trees in the Green Mountains of Vermont. He has poems forthcoming in The Los Angeles Review, Golden Handcuffs Review, and Alive at the Center: An Anthology of Northwest Poems. 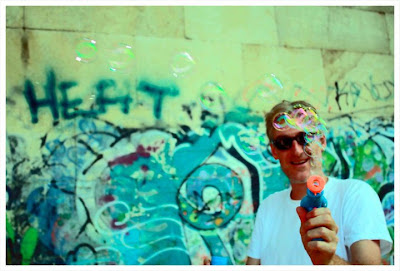 Posted by MrJeffery at 6:39 AM