the fricative, the rub

between the sheets, moving into,

walking in a wind.  End

with that plosive, the baby boom,

the dumbed climax.  The r’s

that rise with rosa,

the way it holds

I would grab you

at the haunches, pull

you to my face:  I would

in public as a mask.

into the dark heat of you:

of your name &  of your taste

until:  my voice rang  out

I would be in you

as long as we could

both bear.   Every hour

I would open you,

further.  Thin as you are

I would have you

thinner:  like paper:
I would fold you in half:

then half again.  I would

another thing needing seen to.

Ride inside my pocket

with my lighters, my change, my keys.

RJ Gibson holds an MFA in Poetry from the Program for Writers at Warren Wilson College. He is the author of the chapbooks Scavenge (co-winner of the 2009 Robin Becker Prize) and You Could Learn a Lot, both from Seven Kitchens Press. His writing has appeared in Court Green, Columbia Poetry Review, Kenyon Review Online, the Cortland Review,LambdaLiterary.org, and in the anthologies My Diva: 65 Gay Men on the Women Who Inspire Them, Collective Brightness: LGBTIQ Poets on Faith, Religion & Spirituality, and Writing Into the Forbidden: On Cultivating the Courage to Speak. He was a semifinalist for the 2013 Discovery/Boston Review Prize. Currently he is a Lecturer at West Virginia Wesleyan College. 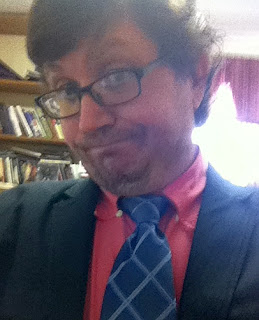 Posted by MrJeffery at 6:31 AM