Drum Solo in a Basement


He asked her if it was just bang bang,
sitting behind me on a NJ Transit train.
I guess that’s not dating a mutual friend
but sex here and there, needs filled,
fucking on a couch in a furnished basement,
the unprotected splitting halves on cushions,
wet opening battered, a marsupial pouch fisted
behind a fifty-gallon aquarium, football trophies
on shelves built into walls, displayed since childhood,
his baby arm pounding a drum, lodged pink deep,
a diaphragm for birth control but she’s on the pill.
It’s just his hips against her bottom: bang bang
they say, like gun shots in the Outback,
kangaroos wiping out face first,
buckshot in hides, wet spots,
stains on upholstery. He doesn’t ask
how often this happens, but says do what
you want to do. Three more stops and I’m out
of here. Music not loud enough played from an iPod,
a new term overheard, and it’s not yet St. Patrick’s Day,
the parade happening, couches waiting for company,
all floors in houses or apartments outside of the city,
dinner at Outback, steak and lobster tail, rare,
no salad, the pink inside bleeding on a plate,
something pulled limp from a pouch, dead joey.
Bang bang he said. Her legs still spread.
She’s leaking an aquarium of hungry fish,
fifty gallons of water moving to a drum solo.


Like rubbing balloons on the side of my head,
I hear hands heating thighs with rapid arm movements,
sounds of petting upper legs in a stall on Thursday afternoon,
and I’m peeing for a fourth time, staring at fluorescent light fixtures,
the rectangles in the ceiling lit like sunshine behind pointillist glass.
One hovers above like three hours till another workday ends
or a frozen camera flash floating sky high and sub-UFO,
causing people to believe in signs from God.
A newspaper is unfolded in the farther stall, and a squeak and splash echo
from the one next door. I frown while turning toward the left-hand wall,
disappointed that I’m not alone, that I’ll need to flush
and return to my office. Someone walks in the bathroom,
whistling a tune, the theme song to I Dream of Genie,
a television series from the ’60s, catchy music notes
historical like The Star-Spangled Banner—
every good American knows the words,
how the flag was still there, imagining baseball stadiums,
Sabrett hot dogs, and plastic cups of beer. The music ends
with a zipper pulled down, a fingernail flicked
over the teeth of a comb, like a child amazed by plastic
or the ease of the button-fly and fishing a penis through
the underwear hole. I lean my head back a second time,
but close my eyes while tapping the last of my visit.
The toilet accepts every drop; I pretend to sleep
while standing up. Three lightbulbs appear,
stuck in white sockets like glowing flower petals
or a trio of pear-shaped balloons knotted together
inside the light fixture of my childhood bedroom.
A circular piece of white glass once covered them,
hiding 100-watt bulbs, eight feet in the air, in arm’s reach
when standing on an office chair. Someone belches
and piss shoots a urinal cake, creating a nonstop drum beat,
like a UFO light beam exploring a human, amplifying the sound
of blood running through the head. I recall the crash one morning,
when the white glass fell for no reason, shattering on the area rug
and altering the lighting, like pin-pricking balloons on the wall
or flushing a toilet in a public bathroom, water and human waste
devoured in industrial strength whirlpools, spraying droplets
on the toilet seat. I unlock the swinging door behind me.
My workday nearly done, with Friday to look forward to,
I wash my hands in automatic streams of sink water,
while a stranger in the center stall hums
the theme song to I Dream of Genie.

Robert Siek is a poet who lives in Brooklyn and works as a production editor at a large publishing house in Manhattan. His poems have appeared in journals such as Columbia Poetry Review, Lodestar Quarterly, Court Green, Mary, and Assaracus. In 2002, the New School published his chapbook Clubbed Kid, and in 2007, he was included in the short-fiction anthology Userlands. His first full-length collection of poetry, Purpose and Devil Piss, will be released by Sibling Rivalry Press in October 2013. 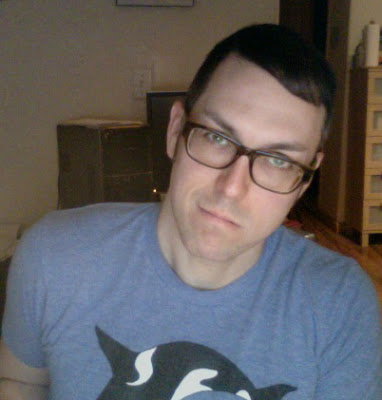 Posted by MrJeffery at 8:43 AM