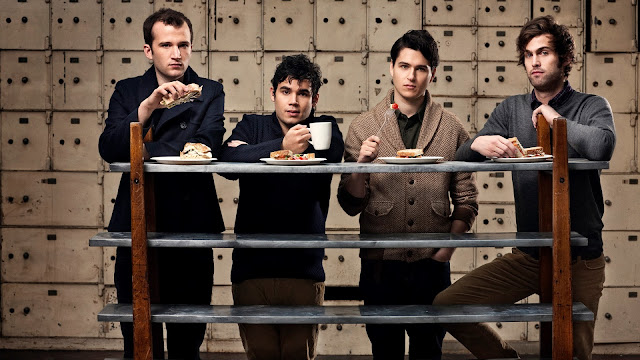 Well, I have the sniffles and a super sore throat which means I'm in the post-Coachella recuperation phase!  God, what a weekend.  And what a sandstorm that was Sunday night, huh?  Some random disappointments (see: The Stone Roses, Rodriguez and Yeah Yeah Yeahs) and some amazing surprises (i.e., R. Kelly coming out to sing "Ignition" with Phoenix!??!).  So here's my follow up to what I heard and saw on who was amazing.

Her set alone was amazing but when she came out to do her remix of Running with Disclosure?  Forget it.  I nearly blacked out and lost my damn mind.

Anticipation was building all weekend for them and when they started at the height of the sandstorm Sunday night, nobody was thinking about the sand and dirt stuck in every crevice of their bodies.

This Harlem Shaker had the entire Sahara tent going apeshit and man, was he hyped up!  He just did NOT stop moving and the crowd reciprocated his hyper behavior.

Easily one of the biggest crowds all weekend and they delivered.  Surprisingly great set and it was awesome to see Ben Gibbard and Jenny Lewis dance around the main stage together.

There was this group of bros to my right that had a specific dance for each and every established song.  It was hilarious to watch and overall, the crowd was loving VW.

I still can't believe he's barely 19.  It's just not RIGHT.  He sounds at least 20 years older than that and his lyrics are so unbelievably wise beyond his age.

They played at sunset and their dreamy tunes fit in perfectly with the setting.  Absolutely gorgeous.


That's all for now!  Back to blowing my nose and trying to remember everything that happened!

Posted by MrJeffery at 6:58 AM