“February 13, 2010. Cincinnati, Ohio.
Lord Byron says, A celebrity is one who
is known to many persons he is glad
he doesn't know. I don’t know Byron
but when I heard that ,I wanted to meet
the guy something awful. Even awfullier,
Byron’s dead. Oh well. Last night in
Philadelphia, this lady came backstage
and she had named her baby Britney
Jean just like me, and I said, Well
ain’t that sweet, y’all. But get this:
the baby was real jaundice and ugly.
It makes you wonder about the things
you can never control. I’m real tired.
Have been for weeks. Sometimes I think
of leaving music to help people. I could
be a nurse in one of those hospitals where
all the kids have cancer. Who knows?
Oh! I wanted to tell you what Lord Byron
had said because whenever you hear
something real smart or sexy you always
write it down. Maybe you can use all this.
I miss you. Don’t forget me. Write soon.”


Britney Spears may be the metaphor
for your life. Your hair needs cut, or
at least styled. Do not take any of this
too seriously? You could love that man,
though, and he’s a much better person
than he lets himself be. Fuck! Did you
just say that? Let your hair be a wild
garden. But please, shave your beard.
Your mother says you will make some
woman very happy someday. Your
mother says a lot of things to be taken
(a casserole!) with a grain of salt. That
man skinboned your chest and neck.
Every day you change the bandages
instead of letting the thing bleed out,
instead of letting the thing heal. Listen
to yourself, son. Really. So tonight
we’ll go to the bar. You’ll meet a boy
there. Unsure if he likes boys or girls,
you’ll buy him a drink, some token
of either friendship, or love, or lust or,
what is this? living? We can all hope.
The boy at the bar will tell you a joke
for which you already know the hook:
Britney Spears and a zebra in Quebec.

D. Gilson holds an MFA from Chatham University and is currently a PhD student in American Literature & Culture at George Washington University. His work has appeared in The Indiana Review, Assaracus, Beloit Poetry Journal, The Rumpus, and elsewhere. His first chapbook, Catch & Release, won the 2011 Robin Becker Chapbook Prize from Seven Kitchens and his new chapbook, Brit Lit, is forthcoming from Sibling Rivalry. Find him at dgilson.com. 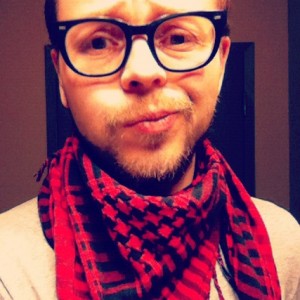 Posted by MrJeffery at 5:41 AM