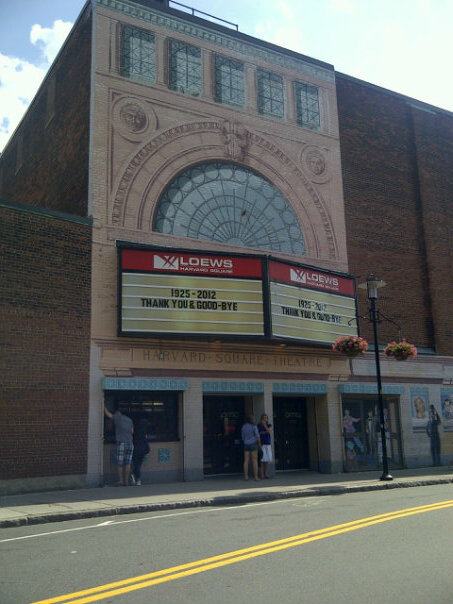 To the uninitiated, it was a somewhat rundown, outmoded multiplex. That, in its later years, wouldn’t have been an entirely inaccurate assessment. To area residents and university students, it was a neighborhood staple, set about on a relative side street, with a medium-sized entrance, a modest marquee and a large brick façade – and a venerable institution. 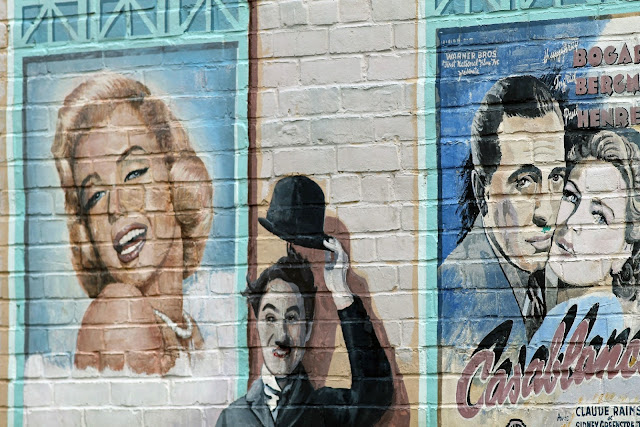 The Harvard Square Theatre in Cambridge, Massachusetts first opened its doors in 1925 as the University Theatre. It was designed in the Italian Renaissance style of architecture, with several murals and two large organ grilles adorning the sides of its proscenium arch and 40-foot screen, among other features. Films were the primary focus, as were appearances by musical acts. (Among those which performed on its stage: David Bowie, Iggy Pop, Bruce Springsteen, The Clash and Bob Dylan.) Seating 1,900 in its original configuration (and reduced to 1,700 during a 1961-1962 renovation), it was triplexed in 1983, with its balcony sealed off from the orchestra level and divided into two additional auditoriums; then, in 1985, while under the operation of Sack Theatres, the former dressing room areas located behind the main auditorium were gutted and converted into a pair of additional screens, bringing the ultimate total to five. During the multiplexing, most of the original detailing within the theatre was covered up, save for primarily the two organ grilles.

Images of the then-University Theatre from 1935:


From the mid-1970s until the fall of 1985, the theatre screened a revival program of classic and contemporary double features, with the occasional single feature (Dr. Zhivago and Lawrence of Arabia were among the regular offerings) or triple bill, typically consisting of three Marx Brothers features. (The programming had shifted from the Cinema 733 – now one-half of a Pizzeria Uno – on Boylston Street in Boston and would later move, through 1987, to the Janus Cinema – currently a Staples – at the Galleria in Harvard Square.)

Calendars were published every two months – starting in January of each year – and were printed on 8 ½” x 14” paper, single-sided, and in either green, blue, red or purple ink (orange and teal were used on at least one occasion each). At the top of each calendar was the theatre’s address and phone number, enclosed within the silhouette of a curtained stage and an audience. There wasn’t a pattern to the bookings. One day the offering would be a double feature of The Exorcist and The Shining, then a pair of Hitchcock films, followed by a twin bill of Taxi Driver and Raging Bull. The films were listed – no descriptions provided – with titles only, showtimes and dates, in a dual-column format. In addition there were midnight specials every Friday and Saturday night (The Song Remains the Same, Andy Warhol’s Frankenstein and Dawn of the Dead, among other cinematic witching-hour staples of the era.) The calendars were ubiquitously available across town – printed in black-and-white in The Boston Phoenix newspaper, on top of cigarette vending machines in coffee shops and diners, at pharmacies, delis, convenience stores and supermarkets.

After the revival program switched over to the Janus, the focus of bookings at the Harvard Square Theatre shifted exclusively to first-run (with the exception of weekend screenings of The Rocky Horror Picture Show, which began in 1984) – a combination of higher-pedigree studio films, combined with a selection of art house and independent titles. The theatre also went through a series of owners – from Sack Theatres to USA Cinemas to Loews to Sony, back to Loews, and then AMC Loews. (There was also an attempt, during the USA Cinemas days and initial Loews period, to formally re-brand it as a sibling of the Nickelodeon Cinemas, then located near Boston University – closed in 2001, demolished in 2004 and currently the site of a campus building – but it never stuck.)

My personal introduction to the Harvard Square Theatre came in June of 1982. Growing up, there wasn’t very much money in our house. In association with that deficit, most years there was also a lack of air conditioning. Always on the lookout for bargains – and perhaps cognizant of the budding film aficionado in their midst – my parents and I set out for an afternoon and early evening of chilled comfort in the company of a double feature of Raiders of the Lost Ark and Popeye. I fell in love – further with the art form I was witnessing on screen and also with the venue in which I was experiencing it. Between that day and the early morning hours of this past July 8th, I saw 123 films at the Harvard Square Theatre, including one in particular on three separate occasions (more on that particular favorite in a moment, if the hints above didn’t already give it away).

This past June 21st, I found a story on Boston.com, reporting that the Harvard Square Theatre would be closing on July 8th. AMC Theatres, recently purchased by The Wanda Group, a China-based conglomerate, was looking to ease its bottom line and, in the Harvard Square Theatre, had a property within its portfolio which did not fit its model of modern, all-stadium seating multiplexes of eight screens or more, and decided to post it for sale. I already had plans to be in the Boston area the weekend of July 7th to visit family and friends. Even if I hadn’t, I wasn’t going to pass up the opportunity to say a final farewell to my personal Cinema Paradiso. Immediately I purchased a ticket for what was to be the final showing of Rocky Horror at the venerable moviehouse located at 10 Church Street – on July 8th, at 12:30 am.

When I arrived at the theatre at 11:30 pm on the night of July 7th, a queue of about 150 people had already gathered along Church Street, along with security members of the local Rocky Horror live performance troupe, the Full Body Cast, staff from other area AMC locations and assorted news media. As soon as us audience members filed in, I purchased my standard Rocky Horror ‘bag of shit’, consisting of toilet paper sheets, a newspaper page, a party hat and blower and a small bag of rice. If the Harvard Square Theatre had to go out, it was going to be a party and not a funeral.

Once the film and performance began around 1:15 am (all in the original auditorium), the celebration began. (For anyone who’s a Rocky Horror virgin – there’s more than one meaning to that term – you owe it to yourself to have your cherry popped; double-entendre fully intended.) After the closing credits finished rolling just after 3 am, the audience and members of the Full Body Cast broke out in a rousing performance of "Don’t Stop Believing." (It was also announced that Rocky Horror was moving to the AMC Loews Boston Common 19.) As we left, I took one final look at the theatre, absorbing every detail – architectural (those organ grilles especially), just over 30 years’ worth of memories – and walked into the balmy, early summer morning. While outside the theatre entrance, I took a glance at the marquee which, instead of listing the titles of the final films to screen at the Harvard Square Theatre (in addition: Ted; Magic Mike; Abraham Lincoln: Vampire Hunter; Brave; and Prometheus), featured a tribute both concise and expansive: 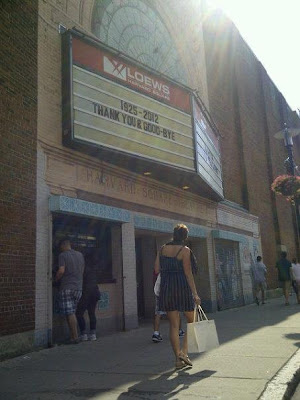 Four days after its closing, AMC found a buyer for the Harvard Square Theatre. Richard L. Friedman, President and CEO of Cambridge-based real estate firm Carpenter and Company, purchased it for $6.5MM. The future of the theatre is still unknown at this point yet, based on Carpenter and Company’s other properties, including their conversion of the former Charles Street Jail in Boston into the Liberty Hotel, there’s reason for some level of optimism for the site’s future, even if it doesn’t reopen as a cinema.


Film memories are forever and the unforgettable ones the Harvard Square Theatre provided me with are ones I’ll carry with me always. 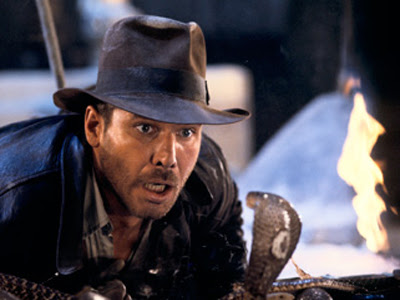