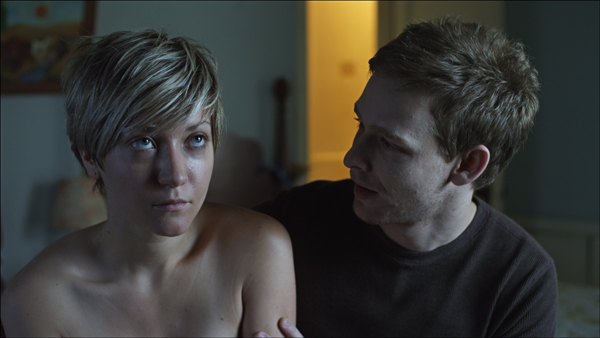 Lovely Molly is a bleak psychological horror film from Eduardo Sánchez (co-director of The Blair Witch Project) about a woman (Gretchen Lodge) who is a former drug addict now happily and newly married but still haunted by past demons when she moves into her old family house with her trucker (meaning not home very much) husband (Johnny Lewis, the actor who died this past month in a bizarre incident).  Creepy things start going on in the house (alarms going off, sounds) and not much is thought of it at first until Molly goes through some extreme physical and brutal psychological attacks.  Lodge, in her first film, is a good performer and her frosted pixie cut and large sad doe eyes help create a believable character.  Lewis is natural as her husband... a shame he left and in such a terrible way.  Also good is Alexandra Holden as her raspy-voiced sister.  At first, because of the opening scene, I thought this was another entry in the now tired (though this year's anthology flick V/H/S found some effective uses of it) camcorder / lost footage flick.  Luckily it isn't, though Sánchez should have ditched the landmark style of Blair Witch since he handles the narrative so spookily in the non-camcordered scenes (the sound design and rock band Tortoise's dissonant music are unsettling).  **

Posted by MrJeffery at 4:44 PM