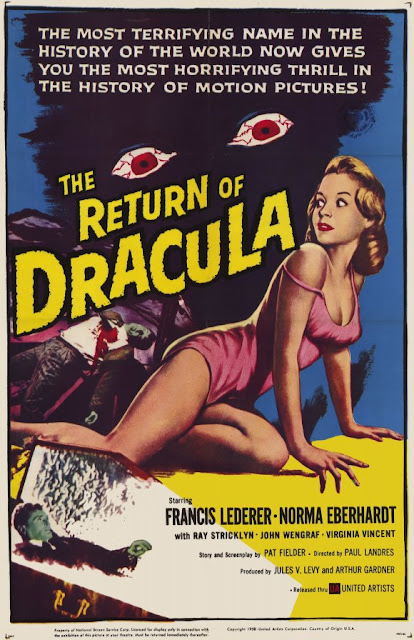 Here lies a nifty retelling of Bram Stoker's Dracula set in the 1950s.  In 1958's The Return of Dracula, The Count (a creepy Francis Lederer) murders and steals the identity of a painter Belac Gordal, travels from Transylvania to a sleepy California town and stays there with Gordal's cousin Cora Mayberry (Greta Granstedt).  Rachel Mayberry (Norma Eberhardt) is the sweet young daughter who is somewhat charmed by Gordal and his love of art but is also intrigued by some of his mysterious behaviors. 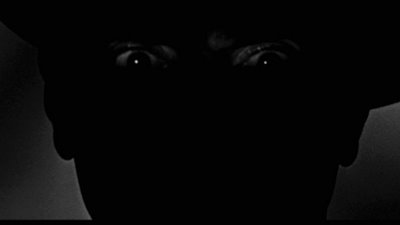 Even though it's somewhat drawn out in parts, The Return of Dracula by Director Paul Landres, is definitely an essential for fans of those paranoid 1950s horror movies.  Though far less suspenseful  it has shadings of Hitchcock's Shadow of a Doubt.  Return has some nice atmosphere and cool shots (including a quick one in color!). Lederer makes a great Dracula; he later replicated the role on "Night Gallery." The Return of Dracula has been overshadowed by other Dracula flicks, including the Hammer version which also came out in 1958 and would end up defining the horror of the 1960s, but has gained more of a following lately in this current vamp-boom and is now available to watch on Netflix instant. **1/2