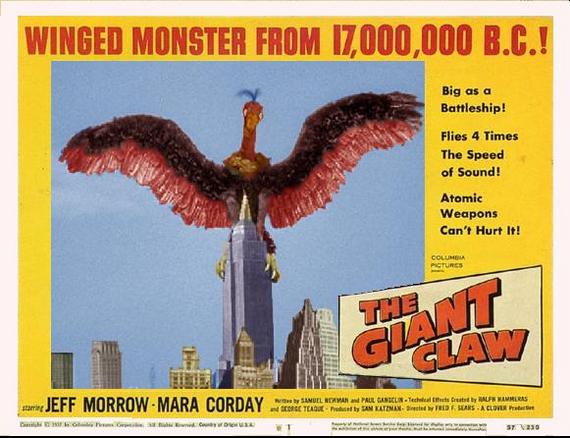 When one is feeling down, one must watch The Giant Claw.  The Fred F. Sears B-movie follows the destructive path of a gigantic, cawing buzzard.  No one, not even the might of all the military, knows how to stop it.  Like most 1950s monsters movies, the setup is doused with a healthy amount of doubt among official, scientist and government types.  But then the action finally gets going as Jeff Morrow (sturdy and unflappable) and Mara Corday (smart and strong-willed) try to trap and destroy the big ol' bird.  Best sequences involve a series of snapshots of the beast with a closeup of its gap toothy grin, a carload of obnoxious teens who get what they deserve, and the big buzzard taking bites out of the UN and Empire State Building (eat your heart out, Kong).  All of these scenes made me laugh; the effects and editing are deliriously shoddy and there are some great bad lines too ("Now, I don't don't care if that bird came from outer space or Upper Saddle River, New Jersey; it's still made of flesh and blood - of some sort - and vulnerable to bullets and bombs.").  Ray Harryhausen originally planned to do the effects but budget limitations forced the crew to use trick shots and a marionette.  Reportedly no one, including the actors, knew what the bird would look like until the film's release.  Had Columbia Pics had the dough, perhaps it could have ended up being a horror classic, but the schlock effects on display here are enduring and charming.  **1/2 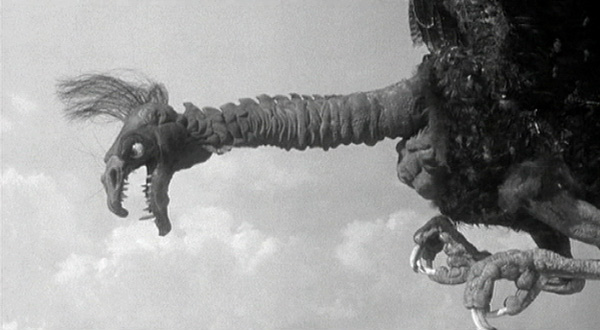