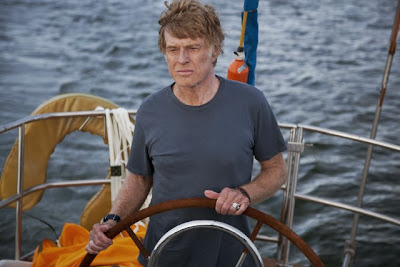 After the babbling economic collapse pastiche Margin Call, director / writer J.C. Chandor returns with the basically wordless All is Lost.  Robert Redford plays a man alone on a yacht that hits a shipping container and then a major storm, leaving him out to sea with little hope.  This is an experiment for Chandor who nimbly executes his piece. But it's also sort of a boring and wonky movie about pragmatic decisions in perilous oceanic situations and Redford's face.  There are some undeniably beautiful shots throughout, exquisite editing and sound design, and a pretty score by Alex Ebert (of Edward Sharpe & the Magnetic Zeroes). Quietly expressive, Redford carries the pic solidly, quite fit and able for his near 80 years in a physically demanding role. He is also someone the average indie film goer (pretty much the audience for this flick) automatically cares about since he is primarily responsible for shaping American independent cinema today. But I found him slightly better in the recent mixed-bag The Company You Keep where I sensed a glimmer of nostalgia and pathos for him.  It doesn't help that this year (and this week) also offers mayhem-at-sea thriller Captain Phillips with a super showy comeback for Tom Hanks and the similarly-plotted survivalist tale Gravity which is a space barn-burner and a visual effects stunner; as flimsy as the script in Gravity is, at least it kind of attempts to characterize its heroine. Critics have heaped praise upon Chandor and Redford's work as meditative and "somberly spectacular" but in the end I found it too slight.  **1/2

Posted by MrJeffery at 1:30 PM