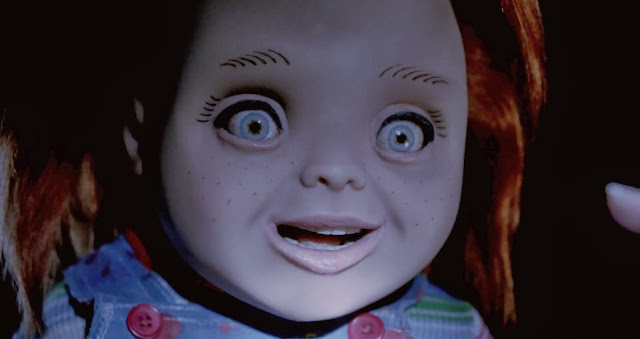 It's been a while since we've seen everyone's favorite overalled, red-haired doll of terror.  In Curse of Chucky, Chucky (Brad Dourif) is back, anonymously delivered in a package to a wheelchair-bound Nica (Fiona Dourif; Brad's daughter) who's grieving the suicide of her mother.  With husband Ian (Brennan Elliott), daughter Alice (Summer Howell), and pretty au pair (Maitland McConnell) in tow, domineering older sister Barb (Danielle Bisutti) comes to visit to try to sell the mother's estate. Alice finds Chucky and befriends him as Chucky begins his killing spree upon the house, including Father Frank (A Martinez) who unfotunately eats the wrong bowl of chili (Chucky-dusted with rat poision powder). 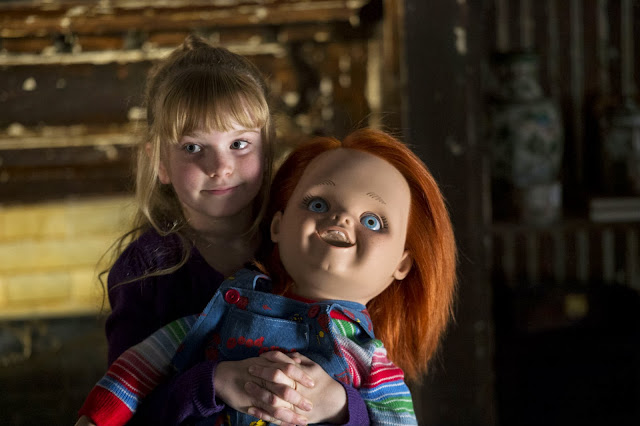 Don Mancini (Seed of Chucky) directs this straight-to-DVD affair.  He wrote the original story and screenplay for Tom Holland's 1988 horror film.  The Chucky films seemed to capitalize early on an era of a changing horror audience looking for brisk, tongue-in-cheek, wisecracking gorefests.  The late 80s is when Freddy Kruger went a little bit more screwball as well. Curse of Chucky continues that vibe and it's actually not that bad, especially for a non-theatrical release, with a decent cast and some icky makeup effects (poor Father Frank!).  I was a bit distracted by Chucky's inconsistent look, the too over-the-top lightning storm and the unrealistic mansion that looked like backdrop pictures of paint sample catalogs from the mid-90s.  Yet Mancini is faithful to the fans of the series, with a few well-done jump scares and some in-joke twists and turns in the final scenes. Unfortunately my rental copy was missing the after-credits gag, which sounds brilliant.  **1/2