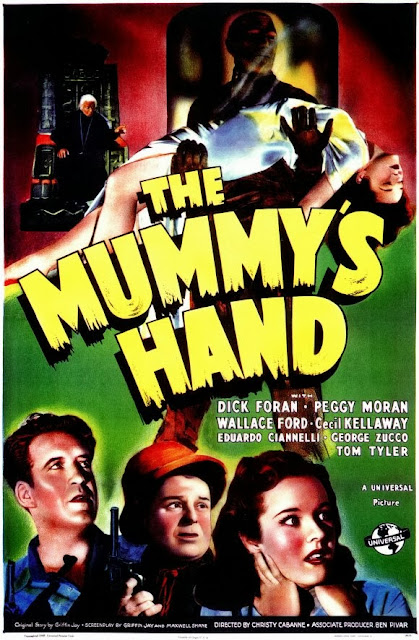 1940's The Mummy's Hand is the first installment in a slew of Kharis Mummy films from Universal Studios.  It's not a direct sequel to the famous and atmospheric Karl Freund 1932 film starring Boris Karloff and it has a little bit more of slapstick tone. In The Mummy's Hand, Kharis (Tom Tyler, best known for his Captain Marvel serial portrayals) wreaks havoc after his tomb is discovered against the wishes of  Egyptian Andoheb (George Zucco) by archaeologist Steve Banning (Dick Foran) and Dr. Petrie (Charles Trowbridge).

Prolific silent movie director (Christy Cabanne) who crafted adventure and horror pics during the 30s and 40s, tries to inject The Mummy's Hand with some intrigue and ghoulish flair.  Like other Universal films of the era, it features some well-designed sets (by R.A. Gaussman), especially for the excavation scenes. Tyler is no Karloff but is still a particularly creepy mummy, with blacked out eyes (they were indeed meticulously blacked out, frame by frame), excellent make-up work (by Jack P. Pierce) and a twisted stomp.  Unfortunately creepy Kharis appears way to late in the proceedings, as the film is a bit tepid in the first half, padded with unfunny comic moments. **1/2 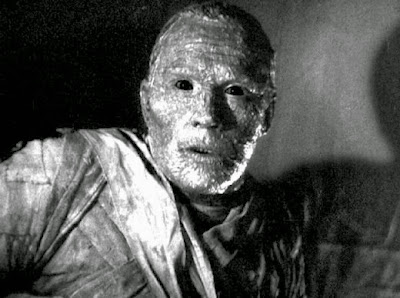 Posted by MrJeffery at 1:28 PM