god hates 'the lords of salem' by justin lockwood 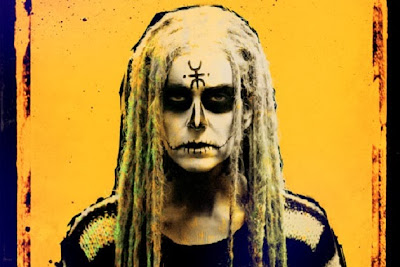 I’ve always been a champion of Rob Zombie, despite his movies garnering mixed reviews from critics and fans, to say the least.  I dig his bold visual style and enjoy his trashy dialogue and characters.  His movies are idiosyncratic and wholly his own.  Even if they’re not scary, and sometimes they aren’t, they’re always interesting.

His latest film, The Lords of Salem, gained a lot from a second viewing.  It’s not as gory or profane as any of his previous movies, but in some ways it’s less accessible to mainstream audiences.  It’s all about mood and slow building creepiness, and requires maybe a little too much patience for most people.  But with each movie Zombie grows more visually accomplished, and this one’s no exception.  The swinging light bulbs in a blue-gray hallway; the grey expanse of a leaf strewn cemetery; the blinding red light of a crucifix appearing inexplicably in a vacant apartment—all are rendered simply and strikingly.

The fact that Sheri Moon Zombie, the director’s wife, appears in all of his movies and is the lead of this one is a particular bone of contention for a lot of people.  She’s not a great actress, and many insist her continued presence is bald nepotism with no redeeming value.  I disagree.  For one, Zombie is the auteur here, and it’s his right to cast whoever the hell he wants, including his wife.  For another, one of his major focuses, especially as his movies have gotten more polished, is visuals.  Sheri is a stunning looking woman, and Zombie puts her beauty to good use.  In one of her first scenes, she’s shown prone on her stomach, naked, as the alarm jars her from sleep.  Simply put, she’s got a great body, and it makes for a lovely image.  Zombie also gave her a mane of dreadlocked hair in The Lords of Salem, a bold choice that seems to serve two purposes: to quickly establish character—her Heidi LaRoc is a radio DJ and recovering drug addict—and to allow him to filter light through the long withering locks of her hair.  Zombie seems to understand her limitations as an actress and to make the most of her attributes and appeal. 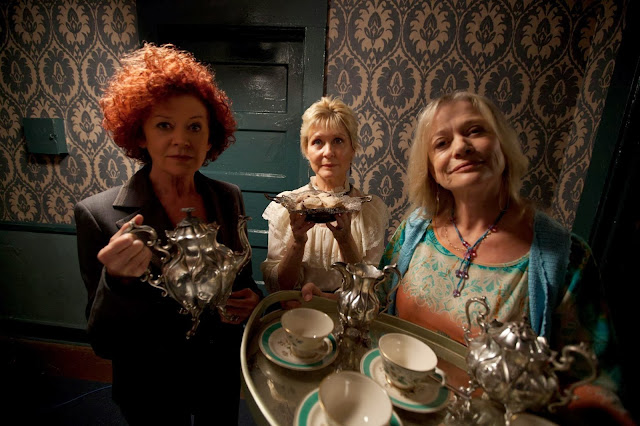 He also surrounds her with a cast of capable and interesting actors.  Meg Foster is terrifying as the maniacal witch, Margret Moran; Judy Geeson, Patricia Quinn, and Dee Wallace are all terrific as the trio of women whose friendliness towards Heidi masks nefarious intentions; and Bruce Davison is grounded and real as a historian and would-be savior.  Of the modern day coven, Geeson in particular gives her character an authentic, lived-in quality that pays off as she transitions from maternal to threatening, and Wallace, a genre favorite, imbues her ironically named “Sunny” with considerable ass kicking intensity.  Jeff Daniel Phillips is an impassioned, if typically shaggy and shlubby looking, Zombie dude in love with Heidi; Zombie regular Ken Foree, though, is pretty much wasted as a fellow DJ with an unfortunate toupee.

Character is secondary to the mood and look of the movie, which the director describes as “if Ken Russell directed The Shining”; it’s filled with long, sustained shots and ghoulish, sudden visions of spectrous witches and hovering, troll like demonoids.  Unlike the eclectic rock soundtracks that filled his previous movies, Zombie here mostly uses John 5 and Griffin Boice’s effective instrumentals and some classical music pieces, which give the film a quieter, subtler quality.  Even his source music, notably two well-chosen Velvet Underground tracks, tends to provide accompaniment to restrained or wordless sequences.  The “Lords theme” that Heidi receives on a mysterious record perhaps captures the essence of what Zombie is trying to do here, with weird, disjointed sounds creating an unnerving tonality without being in-your-face. 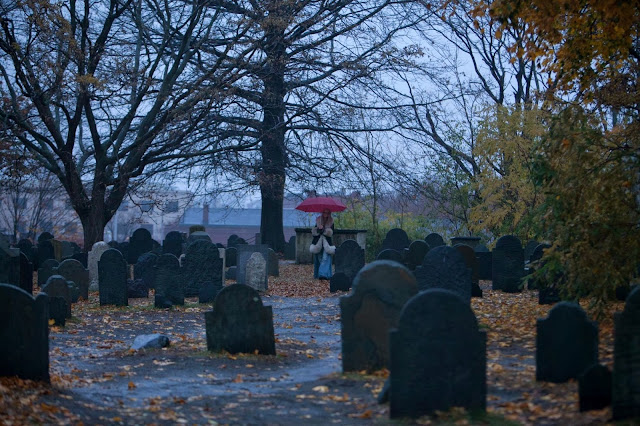 Filming on location in Salem was a smart move.  It gives the movie a realism to contrast with the surreal and dreamy imagery, and provides evocative tableaus for Zombie to work with.  It also lends credence to a movie that plays fast and loose with actual history, at one point acknowledging the non-supernatural real life hysteria before launching into its own invented backstory.  (A cameo by the town’s Bewitched statue early on slyly winks at the confluence of Puritan grimness and pop culture Halloween overkill that has transformed this small town over the decades.)

On first viewing, The Lords of Salem seemed like a minor if unusual effort from Rob Zombie, a first chance to flex creative muscle after years toiling on the rebooted Halloween franchise.  But further inquiry reveals a rewarding, fascinating movie that both stands alone and bodes well for the director’s ability to explore new and better things as he continues to hone his craft.

Posted by MrJeffery at 7:44 AM