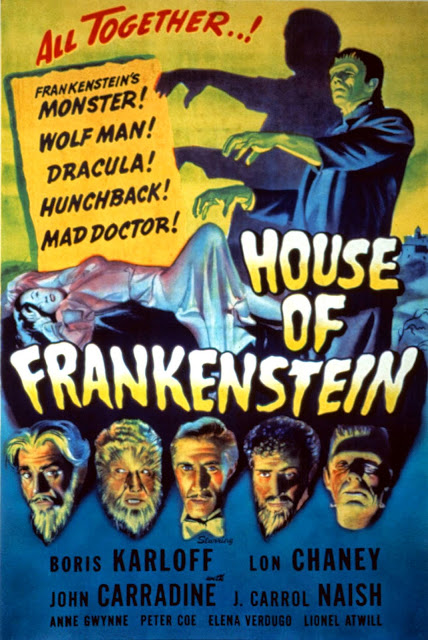 After the box office smash of Frankenstein Meets the Wolf Man, Universal tried reuniting the monsters again, this time with Dracula too.  In House of Frankenstein, Boris Karloff plays imprisoned evil scientist Doctor Niemann who would like to cure his fellow hunchback inmate Daniel (J. Carroll Naish) of his deformity using Dr. Frankenstein's methodology.  By happenstance, a swirling storm and a flash of lightning crumbles down their old jail cell and they escape.  Niemann assumes the identity of traveling horror show ringleader Dr. Lampini (George Zucco) after killing him.  Afterwards, Niemann revives Count Dracula (John Carradine) to avenge his imprisonment and then journeys to a village and to the ice cave (a brilliant piece of set design) where Frankenstein's monster (Glenn Strange) and the Wolf Man (Lon Chaney, Jr.) perished.  Niemann revives them as well in hopes that they will assist him in his lab experiments.

The plot (the script is by Edward T. Lowe, Jr. based upon a story by Curtis Siodmak, who wrote many Universal monster features including the screenplay for the original The Wolf Man), is dopey, with a chopped-in-half  plotline and lots of big coincidences a long the way.  Yet House of Frankenstein ends up moving at a clipped pace and is fairly enjoyable, especially thanks to the sets, the monsters and Karloff's inventive performance.  It's fun to see Chaney, Jr. back again--there's something so melancholy and tortured about his Larry Talbot.  And Glenn Strange is a decent Frankenstein's monster though I think his lumbering walk and goofy makeup job works best in the sillier Abbot and Costello Meet Frankenstein; it's interesting to see him acting alongside Karloff who originated the iconic character for the silver screen.  Supposedly, scheduling conflicts kept Bela Lugosi from appearing in the film.  Perhaps closer to Bram Stoker's vision (though none of that really matters at this point), the suave and svelte Carradine doesn't compare to the eerie magnetism of Lugosi whose presence ends up being a bit of a loss in this mix.  The Mummy was supposed to show up but was nixed because of budgeting.  Nevertheless, House of Frankenstein features some cool effects including the campy transformations of Dracula and The Wolf Man.   It lacks the style, atmosphere and creepiness of Universal's classic original monster movies but it's one of the better of the sequels the studio pumped out in the '40s and even features a fun use of quicksand!  ***