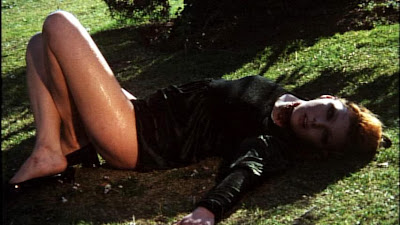 Italian horror auteur Mario Bava's 1971 Bay of Blood (also known as Twitch of the Death Nerve and Bloodbath among others--supposedly has the most alternate titles of any movie) is a twisty giallo that has been influential on many subsequent slasher movies (particularly Friday the 13th and perhaps Adam Wingard's recent dysfunctional family home invasion thriller You're Next).  Bay of Blood follows a murder spree, with different members of a family killing one another in order to gain an inheritance of an estate on the bay.  Set to a spare, repetitive drum beat (the score is by prolific Italian film composer Stelvio Cipriani), the plot is a bit murky and at times confusing (who's killing who and why?) and everyone goes down like dominoes (13 is the final body count) in a bloodbath of sick and gory makeup effects (by legendary Carlo Rambaldi). 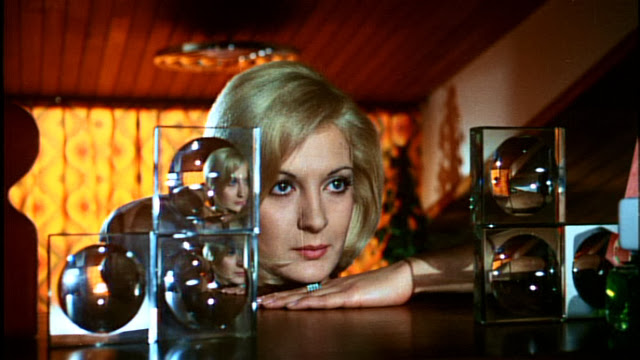 Something tells me Bava made this with both a slight bit of wrath and a tongue-in-cheekiness.  There are zoom shots galore, moments when shots go in and out-of-focus, as if to illustrate the messiness and opacity of the proceedings. And there's a lot of trickiness and black comedy in it too, especially in the gag coda. Supposedly the actual location was a bit bare and Bava compensated for this with close-ups and shots through trees.  It does end up feeling like a secluded, woodsy setting and looks very similar to Camp Crystal Lake.  There are even some through-tree-branch POV shots that are reminiscent of Sean S. Cunningham's movie. As noted many times by horror fans, a double impalement figures that is exactly like the one in Steve Miner's Friday the 13th Part 2. 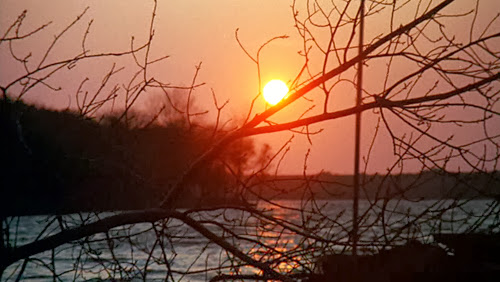 There are some groovy pieces of furniture, costumes, hairstyles and some beautiful shots among all the gore--including a well-captured sunset--but this movie is a departure from Bava's previous, heavily-stylized work and part of the film industry's transition of the lush cinema of the sixties to the more raw work of the seventies. Because of this, it was panned upon release, including by actor Christopher Lee, who is said to have walked out on a showing of it. The effects are indeed shocking and they have a sense of texture and realism to them (squids and hatchet in the head are definitely the squirmiest); the gore lingers much longer than what we're used to in the MPAA edited era. While a bit disjointed overall, Bava's film remains an important movie in horror canon.  ***

Posted by MrJeffery at 6:38 AM