a girl & her bike 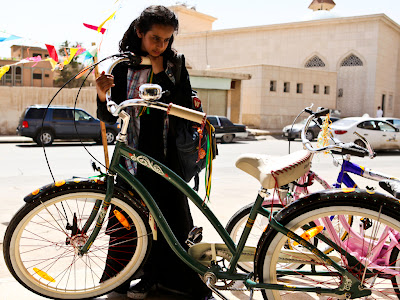 Bicycles have often had an iconic place in cinema from 1948's Italian masterpiece Bicycle Thieves to Breaking Away to E.T. to Pee Wee's Big Adventure.  Writer / Director Haifaa Al-Mansour's clear-eyed and moving Wadjda should now be added to the list of classic films with a bicycle playing a key role.  Wadjda was filmed in five years under extraordinary circumstances which make it a vital artistic statement and also made me love the film much more on a deeper level. It's the first to be shot entirely on location in Saudi Arabia and also the first feature by a female Saudi director. Recently Wadjda made news for being the first film submitted to the Academy Awards from Saudi Arabia for Best Foreign Language film.

The beguiling Waad Mohammed plays the titular role.  A sly, gawky 11-year old in Chuck Taylors (which we glimpse in the effective opening), she's considered a bit of a rebel in her strict Islamic school run by stern Ms. Husa (Ahd).  Wadjda loves Western rock music (hijacked with some antenna manipulation), making bracelets and mix tapes, and playing with best friend neighborhood boy Abdullah (Abdullrahman Al Gohani).  Although girls are forbidden to ride bikes, Wadjda longs for one.  Believing too that girls shouldn't ride bikes, her mother (Reem Abdullah) refuses to buy one for her.  While Wadjda is at school, her mother is driven to and back work arranged by her husband who doesn't let her spend her earnings the way she wishes and is also looking for a second wife to borne a son. 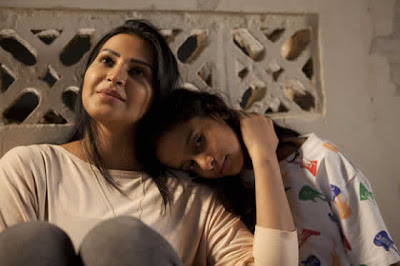 Wadjda and her mother have a loving and sometimes tense relationship and there's a simple beauty to the way Al-Mansour captures this.  Aided by Abdullah's beautiful performance, sometimes the mother's sadness and fears are palpable even when Al-Mansour and Abdullah show us very little.  One scene in particular where the mother stares at a red dress at the mall hits hard in its quietness and dynamic visual and emotional contrast (the rich photography is by Lutz Reitemeier). Al-Mansour has a classic sensibility which heightens the drama and political nature of her story in a non-flashy, still and deceptively gentle way. There are moments when Al-Mansour's script breaks things down plainly to explain customs.  After all this is a coming-of-age from Wadjda's perspective and her growing identification of her second class status in a society run by men but this is also a glimpse of contemporary working class Saudi Arabian life that the Western world rarely (if ever) sees despite our influence and economic exchange. Al-Mansour doesn't belittle her characters, including what could have been a caricatured headmistress. Instead, there are rich parallels throughout and some incisive irony as in the climatic scene where Wadjda recites a passage from the Koran. Al-Mansour reflects upon the shoot: "When we were outside, I had to be in a van because the genders are not supposed to mix outside in public space. So it was difficult, but it was very important to bring this visual, as if people are peeking into the country because there’s no image coming from Saudi Arabia. People don’t know what it looks like."  Al-Mansour and her brave crew and talented cast (many never acting before), have ended up creating an assured, miraculous film indeed. ***1/2