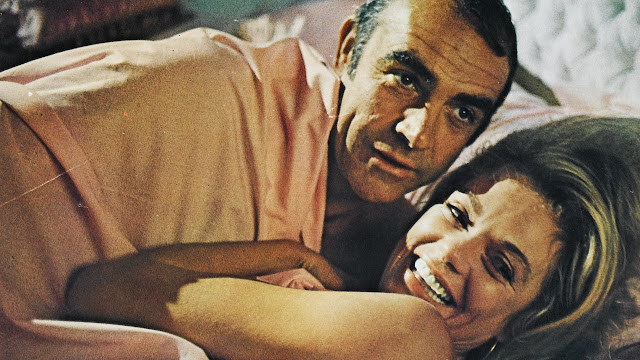 The Anderson Tapes is an interesting movie in light of our current times when the media and Edward Snowden highlighted the activities of NSA into the ongoing American debate over surveillance and privacy.  Based upon a 1970 Laurence Sanders bestseller, Sidney Lumet's 1971 film ended up having a particular relevance on cinema during the Watergate era.  It follows ex con safe-cracker Anderson (Sean Connery, trying to break free of Bond typecasting) who gathers a rag tag team to rob, over Labor Day weekend (pertinent to this day!), his girlfriend Ingrid's (Dyan Cannon) posh Upper East Side apartment building.  Meanwhile Anderson and Ingrid are unknowingly being bugged as are his cohorts who are under surveillance (legally and illegally) for different reasons from an array of agencies. 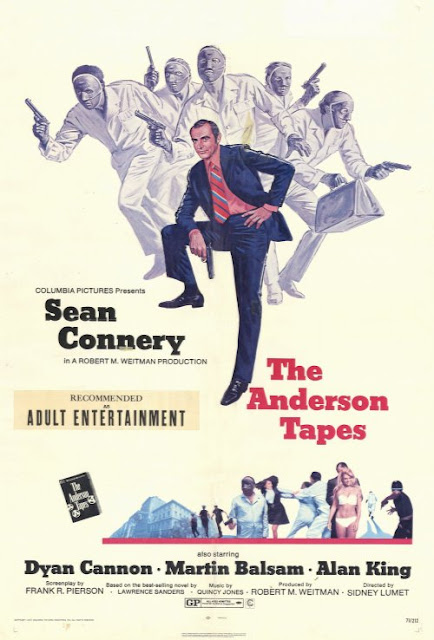 Anderson's character leaves prison after ten years and it's significant to the film that he was incarcerated during the tumult of the 1960s. Entering a newly stylized New York with all the latest gadgetry, Anderson is a bit behind-the-times in creating such a sophisticated heist.  Yet the film shows, in frustrating (bleeps and blops dot the sound design; the jazzy score is by Quincy Jones) and lightly satirical fashion, the incompetency of the surveillance agencies and their crippling bureaucracies. The subjects of the film are reduced to banal terminology and I think it's no mistake that Lumet and legendary casting director Marion Dougherty offer up such a rich, offbeat ensemble.  Martin Balsam is oddly compelling and charming as a gay antiques owner played with dated affectation.  In his first major movie role, a very young-looking Christopher Walken figures as The Kid, showing the loose yet intense presence and the unstudied conviction he continues to bring to cinema.  Character actress Margaret Hamilton appears in her last role as one of the victims alongside a very funny Judith Lowry.  The script is penned by Frank Pierson who would later work with Lumet on their masterpiece Dog Day Afternoon.  One can see shadings of the idiosyncrasies that would later be perfected in Dog Day here.  And like that film and Lumet's Network, the movie has a certain prophetic-ness to our own times. There's a doozy of a monologue which paints the symbiotic relationship of crime and American life delivered angrily by Connery: "What's advertising but a legalized con game? And what the hell's marriage? Extortion, prostitution, soliciting with a government stamp on it. And what the hell's your stock market? A fixed horse race. Some business guy steals a bank, he's a big success story. Face in all the magazines. Some other guy steals the magazine and he's busted."  One could see how The Anderson Tapes could be an appealing remake if the ambivalence and oddball tone is preserved. ***