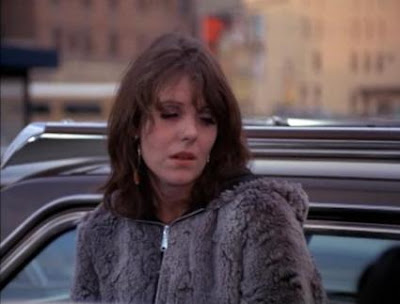 Hustling is a 1975 TV movie based upon writer Gail Sheehy's expose on prostitution which was published as a book of the same name and also as a 1971 series for New York Magazine entitled "Redpants and Sugarman."  It's hard to believe that this gritty--though tame and not very sexually explicit--look at midtown streetwalkers was on ABC; it's likely it would be relegated to Lifetime these days.  Lee Remick (who would memorably figure a year later as the mother in The Omen) is excellent as the serious and well-meaning trench-coated reporter Fran Morrison (loosely based upon Sheehy) with a wavy bob of grayish blonde hair.  Her interest relaying the stories of the prostitutes is compassionate at first, out of a sort of emotional pity. Quickly Fran learns the economic impact of these women and the danger they're in when she begins interviewing the boisterous and emotionally bruised Wanda (Jill Clayburgh). 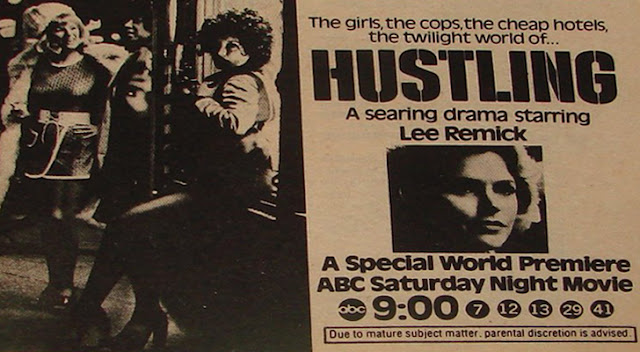 Director Joseph Sargent (his crime classic The Taking of Pelham One Two Three from 1974 is glimpsed in a theater marquee in the opening of Hustling) does well with the material, offering a sensitive portrait of Wanda and her cohorts.  Clayburgh was a phenomenal actress, the kind who just naturally offered more in her eyes than what's in the script, and she certainly disappears here (she was nominated for an Emmy Award). Unfortunately she puts on a New Yawk accent in a nasally pitch that's both slightly annoying and artificial.  But the contrast between Remick and Clayburgh is still emotionally rewarding.  There's also a scrappy supporting cast of familiar 70s faces.  The movie is benefited by on-location shots of a New York in its gritty, sex-shop heyday (I believe some additional shots were filmed in Los Angeles as well).  A year later NYC would be portrayed almost like a circle in Hell by Martin Scorsese in the much more hard-hitting Taxi Driver.  **1/2
Posted by MrJeffery at 9:59 AM