What a weird movie! Maybe one of the weirdest movies I've ever seen.  In the taboo-breaker The Baby, a social worker, Ann Gentry (Anjanette Comer), is drawn to the Wadsworth clan: domineering mother (Ruth Roman) and her peculiar two daughters (Marianna Hill and Susanne Zenor) and her son--a grown man named "Baby" who for years has been treated by his family like a baby--diapers, crib and all.  Gentry tries to play with Baby and help ensure his escape and educational development all to the dissatisfaction of his family. 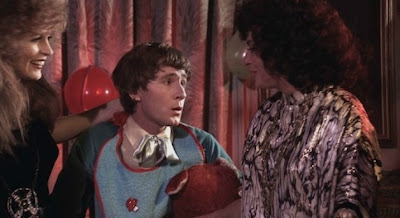 Ted Post (Beneath the Planet of the Apes, Magnum Force, and a slew of offbeat television projects) directs The Baby with style and an unsettling, disarming straightforwardness. Mostly set at the Wadsworth's creaky old house, it's a nicely photographed movie (by Michael Margulies), dusky and eerily-lit, sometimes with shadows of the trees; the close-ups and some near-direct eye contact from its oddball, ambivalent cast of characters are effective.  The alluring Hill, in particular, has mesmerizing glares and some stunning hairdos, including a witchy bouffant at Baby's birthday party (a sequence of killer stares and wardrobe are on full display here). Husky-voiced and commanding Roman adds a lot of flavor, humor, and creepiness to the picture and is a nice contrast to Comer's genial sweetness.  David Mooney plays an impossible role as well as he can, grimacing, and goo-goo-gaga-ing (I think dubbed in parts), and crawling about. 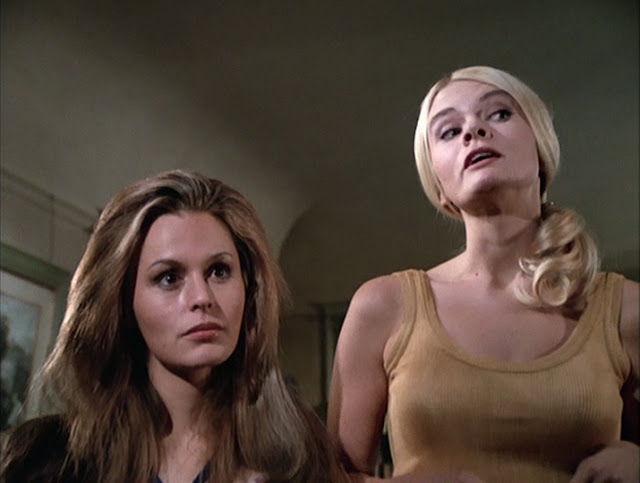 The storyline and style is strange and demented, like Tennessee Williams crossed with "Scooby Doo" and Polanski. The Baby didn't make much of an impact upon its original limited release in 1973 but now has a cult reputation. The strong interaction between the actors, the restrained but exploitation-like feel, the campy final showdown and the shock conclusion makes The Baby an enthralling and sort of icky quasi-horror mystery.  Perhaps it's one of the weirder movies you've ever seen as well. ***

Posted by MrJeffery at 2:47 PM