we are what we are 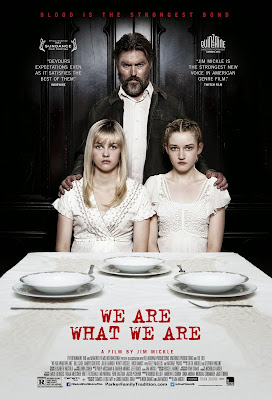 Familial bonds are spotlighted often in horror movies from Leatherface's clan in The Texas Chainsaw Massacre to the mother and son relationships in Psycho and Friday the 13th.  The movies sometimes sympathize with the wicked ways of its villains; after all blood is thicker than water.  Jim Mickle's (Mulberry Street, Stake Land) gruesome new flick We Are What We Are (a remake of 2010's Mexican Somos lo que hay) is another horror movie of twisted family tradition.  The Parkers are an odd, aloof and pale-faced crew, living in a drafty old house in a perpetually overcast, rain-soaked upstate New York small town. The film begins in a rainstorm (evocatively filmed in a bluish, but crisply defined wash; the bewitching photography is by Ryan Samul) with the accidental death of the matriarch.  The strict father (an eerie and stalwart Bill Sage) and his two daughters (Julia Garner and Ambyr Childers) and young son (Jack Gore) mourn her loss in their own stifled ways while attempting to carry on with their bizarre ritualistic behavior without her.  Meanwhile nosy neighbor Marge (a hilariously campy and frumped-up Kelly McGillis), police and town Doc Barrow (a steely and beguiling Michael Parks) begin uncovering what horrifying activities the Parkers have been up to.

Set in a remote-feeling drab environment, the attention to details is what gives We Are What We Are a distinctive and heightened look. The production design by Russell Barnes and set decoration by Daniel Kersting shows the quaint existence of the Parkers with slightly askew, grimy and stylized settings. Throughout, the film reveals little details (old radios, TVs, record players, kitchen utensils) of various eras as the torrents of rain and flooding slowly unearth the family's dark secrets.  The costumes by Liz Vastola and excellent hair-styling (by Cynthia Vanis), especially of the two girls, are sort of Victorian and pent-up and evangelical-goth.  When Garner lets down her tight, tied up braids into a sort of breathtaking (especially for her character) curly blonde bob, we see the sudden change in Rose from a scared, oppressed child to a quietly feisty, more in-control young adult. 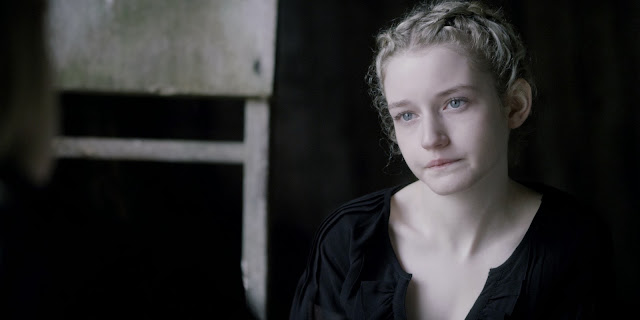 Like many horror films, the movie skewers authority (doddering deputies) and religion.  With some particular heavy religious imagery and symbolism, the film wrestles with themes like nature versus nurturing and whether or not one can ever break free of what they are taught--an idea explicitly expressed in the film's title and inherent in the story's subject matter.  Mickle notes, "Religions often become corrupt from the places where they began.  People often have an incredible blind faith that drives them to do things simply because they've done it before, without ever really thinking about it... It was interesting to explore, how something could actually convince you to do something so horrid.  But if you grew up with it, and it's the only thing you've ever known, and the people you trust are telling you that's the way that it is, is that all that much crazier than any religion?" 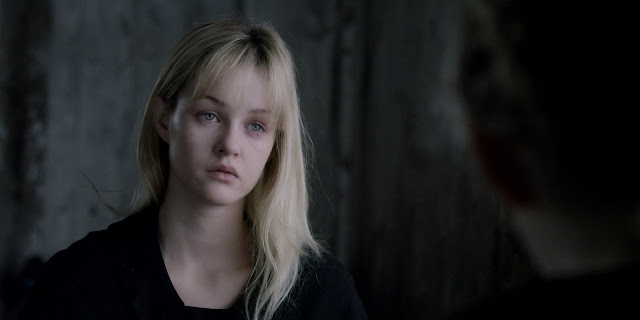 Despite the obvious technical strengths of the film, its macabre beauty and the appealing, salt-of-the-earth performances by the players, I think the film could have moved a couple beats faster especially since the film's lurking mystery becomes quite obvious quickly.  Also a dash more humor here and there could help, especially since the somber first half of the movie is so lethargic and dour.  As she did in the too lugubrious fright flick The Innkeepers, the underused McGillis adds some much-needed camp and fun. Once Doc Barrow (Parks) is on to things, the proceedings pick up, escalating into a nicely brutal and garishly bloody finish. I loved the film's sunrise coda as well.  I definitely wasn't in the mood to eat anything afterwards. ***

Email ThisBlogThis!Share to TwitterShare to FacebookShare to Pinterest
Labels: film reviews, horror, jim mickle, kelly mcgillis, michael parks, ryan samul, we are what we are