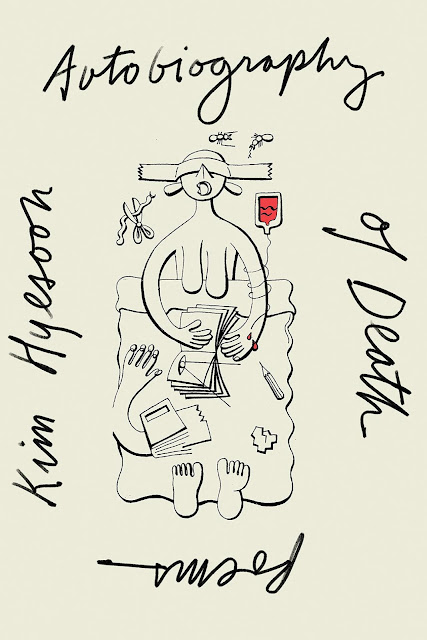 It was interesting to read Anne Sexton's Live or Die and Kim Hyesoon's Autobiography of Death close to one another. Both are chronological and both are steeped in death--in many reflections and relations. Hyesoon's book is unusual and fast. It's compromised of short, punchy sentences with similar structures. But what lies between these phrases are unique perspectives, including portraying death as a physical being looking upon oneself and others. I think of Sexton in "Photograph": "Your doll walks / Your doll talks / Drops its eyes inside itself / Cries till its neck turns all the way around / It may come back to life when you die..." The doll that turns its head around can be us viewing mortality, in a physically impossible fashion which this work takes that on. Hyesoon's poems are twisty, announcing the clash of choice and the inevitable: "Do you want to be a friendly corpse? / Do you want to be a scary corpse? / Do you want to become silk that ghosts kiss? / Do you want to become a sack that ghosts kick? / Every, every day is the eve of death..." Interspersed in the collection are illustrations, zany, visceral and striking, by Hyesoon's daughter Fi Jae Le. There's an interview with Hyesoon at the end of the book of writerly intentions and historical events that inform it, guided by its translator Don Mee Choi, that opens up the poems even more expansively as they lie on the page themselves: "I wanted the poems to vaporize. In other words, I wanted a ghost of collectivity to emerge from the poems." That haunting effect of "vaporizing" certainly worked on me--something I imagine is difficult to tap into as the poems float along in their repetitive, clipped phrases.

Posted by MrJeffery at 3:53 PM