how to love a country 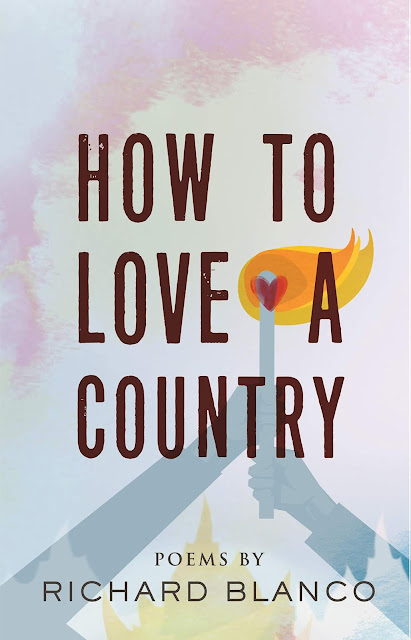 How do you love a country of so much strife, so much racism and violence? That is on the mind of Richard Blanco's poems here. The book seems to come from a lofty place (with lofty blurbs), perhaps because Blanco read at Obama's inauguration in 2013. That time seems so far away, especially as we have long been mired in rolling waves of information bits and also, the devastation of a new president's era. This, in no doubt, elevates Blanco a bit to a national figure--one to speak with great importance of important events. Yet, I think Blanco's poems are often strong and dexterous enough to overcome a sense of the pedantic. There's a personal connection too that adds to their complexity. The metaphor of America as a bully doesn't quite encompass the country's totality, but there is an effective moment in "El Americano in the Mirror," where the speaker confronts his victim from fifth-grade recess: "Why didn't you punch me back?... / I wanted to say: / I'm sorry, maybe I love you. Perhaps even kiss you." Blanco's empathetic portrait is surprising and raw. When responding to the horrific incident at Pulse, Blanco seems to feel an urgency, a need to write about it but also senses the futility in capturing its horror through language: "Draw a metaphor / so we can picture the choir of their invisible spirits / rising with the smoke toward disco lights, imagine / ourselves dancing with them until the very end." This is what makes Blanco's poems in this collection sneakily conflicted. In "Let's Remake America Great," there's a sardonic tone and a re-working of America, heavily through the lens of popular culture--especially television, and personal reflection: "Let's write-out women like my mother, who fled Cuba broken as / her broken English, who cooked dinner in her uniform after / twelve-hour shifts at the supermarket, set the table with plastic / cups she could rinse out and reuse." Those little details, like the plastic cups, bobbing in the sea of importance, add to moments of spark in the book, and where I find Blanco's poems most compelling.

Email ThisBlogThis!Share to TwitterShare to FacebookShare to Pinterest
Labels: how to love a country, poems, poetry, richard blanco