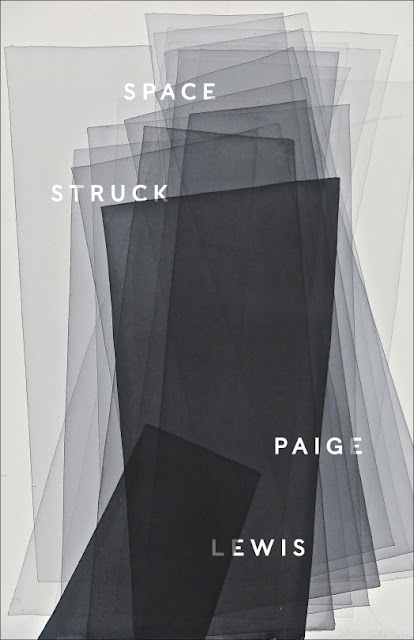 Sometimes a sparkly poetry collection comes along where nearly every line is perfect and extremely clever. For me, that is Paige Lewis's Space Struck. It's fitting that the book begins with the setting up of a zoo of "Normal Everyday Creatures" since there are plenty of animals that roam throughout the collection from a "goose-drawn chariot" to foxes to pelicans to "oysters gasping in unison." It's the most distinct and apt opener in a collection I've read recently. Like a zoo or a diorama (there are a few of those here), the collection acts as a viewing and a cockeyed, sometimes raw and absurd, engagement with the natural world (the speaker asks "for more tactile participation" with the "Terre Haute Planetarium"; the title poem is from the point of view of a meteorite-struck victim; in another, a purple finch is struck by something in space too--"burned / to the grill of my car"). "Space" is a word used a lot in poems and in describing poems to almost banal levels. Those stacked gray rectangles (like "sticks of Juicy Fruit"; like the shadows we're stuck with) on the cover end up being slyly deceiving, as Lewis's spaces ultimately emerge as far more complicated and artful than the ones typically wrought in poetry. Throughout I felt the speaker's unease--"the vice president of panic"--a constant shifting, moving "through life like I'm trying to / avoid a stranger's vacation photo" in a landscape where stirrings of joy and confidence is easily stifled: "I'm ready to shout, / Look at my healthy new life! But my friend / thinks it's a bad idea to frighten people / in a place with so many hard throwables." Among this backdrop are figures of power, saints and such and God ("God's Secretary, Overworked") who are evoked brilliantly and perversely. There comes a point in reviewing a book where I feel like, as I also did in writing about Luljeta Lleshanaku's Negative Space, as someone in Space Struck is noted as one destined for "a prison sentence for anyone caught / explaining magic." I really admire this book and how it's so skillfully-written, arranged, realized and arch, and seemingly effortless in both humor and heart.