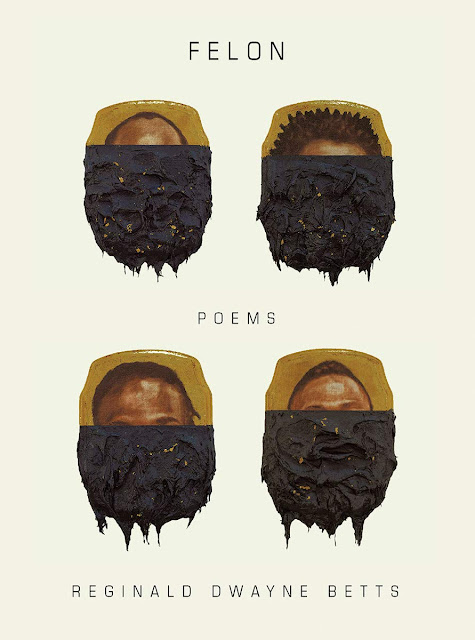 Reginald Dwayne Betts' Felon is a blistering account of the incarcerated and its permanent effects. In his notes, Betts acknowledges "I've always thought of my own writing as having something of the desire of the quilt maker." This stitching of various experiences, texts, music intertwined with the experience of his own, are well-wrought in this collection. Interspersed are effective redacted documents, the bar-like erasures and the text left, giving way to potent lines of poetry. The poems in Betts' collection move with both a steeliness and a delicacy. On re-entering: "You come home & become a parade / of confessions that leave you drowning, / lost recounting the disappeared years. / You say fuck this world where background checks, / like your fingerprints, announce the crimes. / Where so much of who you are betrays / guilt older than you..." And the poems are of complicated thought too, such as "When I Think of Tamir Rice While Driving": "in the backseat my sons laugh & tussle, / far from Tamir's age, adorned with his / complexion & cadence & already warned / about toy pistols, though my rhetoric / ain't about fear, but dislike--about / how guns have haunted me..." and later, "...this is / why I hate it all, the protests & their counters, / the Civil Rights attorneys that stalk the bodies / of the murdered, this dance of ours that reduces / humanity to the dichotomy of the veil." All of this complexity and emotion expressed in clean tercets. The opening "Ghazal" reflects the striking cover art by Titus Kaphar: "... painted my portrait, then dipped it in black tar. / He knows redaction is a dialect after prison. / From inside a cell, the night sky isn't the measure-- / that's why it's prison's vastness your eyes reflect after prison." The form of the ghazal itself and its constraints, the word "prison" repeated throughout as the final word of a sentence, open up the ideas how limits and stops are overrun by the effects of imprisonment that are permanently imprinted. This is such a strong collection. Listening to Betts speak about his writings and experiences are vital as well.

-Jeffery Berg
Posted by MrJeffery at 9:18 AM