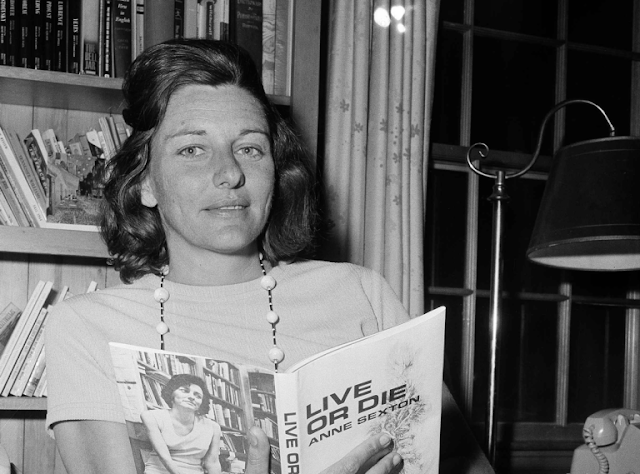 Anne Sexton's 1966 collection Live or Die, looks at death through a unique prism. It's a chronological collection, its dates at the end in italics, ushering in a sense of finality to each of the loose, but direct and calcified poems. Much of the book moves through abuse, death, depression with some fantastical images: "I will have to sink with hundreds of others / on a dumbwaiter into hell. / I will be a light thing. / I will enter death / like someone's lost optical lens." I may have viewed this book differently in younger years, through my own lost optical lenses, before experiencing depression. It makes a more complex read now. I do not relate to the view of Sexton's work as trite, morbid pageantry that sometimes haunts her reputation as a writer--especially in this book. In fact, I feel the book is more celebratory and cunning in the "die" than in the "live." The last lines of the book, I do not inherently trust: "I say Live, Live because of the sun, / the dream, the excitable gift." I may have read the poem "Sylvia's Death," differently before but now, I can understand the vibe of anger and envy that comes across that Plath went before she did: "Thief!-- / how did you crawl into, / crawl down alone / into the death I wanted so badly and for so long, / the death we said we both outgrew, / the one we wore on our skinny breasts, / the one we talked of so often each time / we downed three extra martinis in Boston." There are so many mixtures of emotions and tones, so much concrete countered by evocative lyricism ("I think of dolls, / ... the pink skin and the serious China-blue eyes. / They came from a mysterious country / without the pang of birth, / born quietly and well") in Sexton's work here--her never "uncomplicated hymns"--that Live or Die is inherently tricky to pin down to exactness.