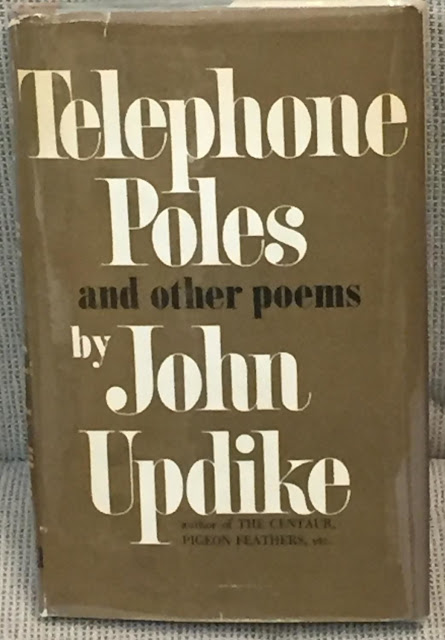 I'm currently reading Rabbit is Rich. I love the feel of time and place in the book and of course, the brusque dialogue, where scrappy characters are endlessly nitpicking at one another. It's definitely a book of another era, the end of the Carter era, gas lines and disco, and it's captured in mesmerizing detail by John Updike. Because of this, I was curious to venture into Updike's poetry this month. I had read one of his books Americana around the time of its 2001 release but I remember very little about it. He's never been as much of a prolific poet as  he remains as a novelist, though his poems have been widely shared over the decades. His 1963 poetry collection Telephone Poles is an interesting curiosity. The majority of the pieces were published in The New Yorker and many of them have a pithy, jocular sensibility that you can imagine would pair well with ads for cameras and high-end liquor. I had doubts I would be able to get through the collection once I got to the second poem, "Reel," which takes self-indulgent pleasure in the sounds of "whirl," "whorl," and "wharve." Reading it out loud sounded horrible and I cringed at its conry nature. This play is also a bit heavy-handed in "Upperville, the upper crust / Say "Bottoms up! from dawn to dusk / And "Ups-a-daisy, dear!" at will-- / I want to live in Upperville. / One-upmanship is there the rule..." It might just feel like a dated affectation. Unfortunately, it doesn't move past frivolity. Self-important yearning is played out in "Thoughts While Driving Home": "Was I charming? / Did I make at least one good pun? / Was I disconcerting? Disarming? / Was I wise? Was I wan? Was I fun?" Self-anxieties, especially male, left unanswered, is something I noticed as pervasive in the Rabbit novels and in these poems. When pondering upon existence to a little white star: "You offer cheer to tiny Man / 'Mid galaxies Gargantuan-- / A little pill in endless night, / An antidote to cosmic fright." Even if there's a triteness to Updike's poems, it's undeniable that his attention to language is hearty and singular. Luckily, the poems get resoundingly better in the book's second section--almost like two different volumes of poetry altogether. The title poem is wistful observation: "They will outlast the elms... / These giants are more constant than evergreens." Thus begins a more meditative swath of writing, less jaggedly jokey, eyeing the frisson between the technological and nature. Later the telephone poles appear in "Vibration": "... outside my windows [they] quivered in an ecstasy / stretched thin between horizons." In "Suburban Madrigal": "... looking through my windows / diagonally at my neighbor's house, / I see his sun-porch windows; / they are filled with blue-green, / the blue-green of my car, / which I parked in front of my house, / more or less, up the street, / where I can't directly see it... / my car, / .... a gorgeous green sunset streaking his panes." This reminds me more of novelist Updike and his ability to capture detail, wryness and emotion so effectively and compactly; it strays away from the more self-conscious, showy vibe of the "poet poems." Also at play are Updike's unusual perspectives of modern life. I am especially inspired to write a poem based upon "Movie House," which ruminates on the back of a movie theater where "from this angle only / the beautiful brick blankness can be grasped. / Monumentality / wears one face in all ages."

-Jeffery Berg
Posted by MrJeffery at 9:14 AM