driving without a license 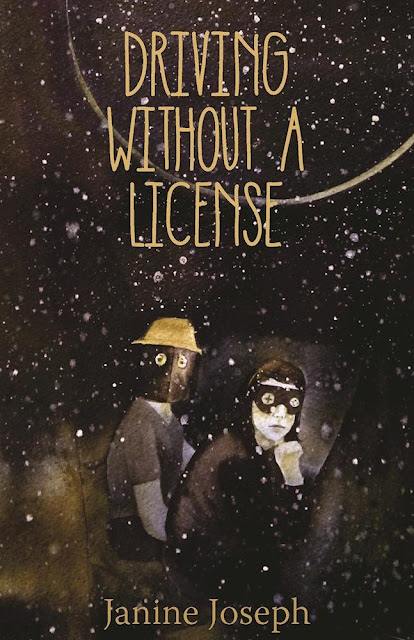 Janine Joseph's debut collection, Driving Without a License, is on a coming-of-age Filipino experience in America--a speaker without the documents, without the license to "prove" citizenry--and it is a frank, lively and illuminating read. What immediately struck me was its kinetics. So much energy, so many verbs tumbling across the page ("we hipped our boxes," "sideswiping"). The visuals of the poems themselves look restless as well, with their twisty indentations. The poems almost spin in space--in junkyards, in childhood rooms, up in the air, and in cars; the poems spin like the speaker, who jumps through memories, investigating belonging. "Assimilation... was only a matter of time... / I had down the Valley girl like, / hugged my binder and books / close to my chest, like in Clueless, / all of my weight on one leg / so the other could be all / like this." Joseph's poems are distinctively Californian, with underlying conflicts of identity. The speaker bravely admits, in "Playing 'Indentured Servants,'" the sometimes mystifying actions of childhood--speaking "the way we in the schoolyard believed Chinese people spoke"--and performative playground power structures of race. Also within the book is an emphasis on naming. Some of the names have been blotted out, just a simple letter (invoking both intimacy and the sense of "Always Hiding") . In "The Name," ("My father's choice was Jennifer..."), a litany of names spill forth along with the speaker's spry associations. "You Lie" drudges up an American moment that still makes me queasy from 2009. Funnily enough, the "You lie" has stuck, but the "reasoning" of it hasn't. And Joseph reminds us in the CNN blurb note that the two words were blurted out by a representative during the State of the Union after "the president denied that health care legislation would provide free coverage for illegal immigrants." In the poem, Joseph writes, "my medical history / was an unidentified coastline." Overall, I found the poems in this book haunting, with sly lines and excellently-wrought pieces in both form and free verse. There are many lovely moments too, such as in "Break" where "I was a ghost away / from wild magnesium / and our braincases were split- / seconds from barreling the mine shafts / with calcium pearls-- / and no search party for me." There are maps--even an era-stamped mentioning of MapQuest--borders, and archipelagos--all indicative of a speaker's on-going searching and defining.