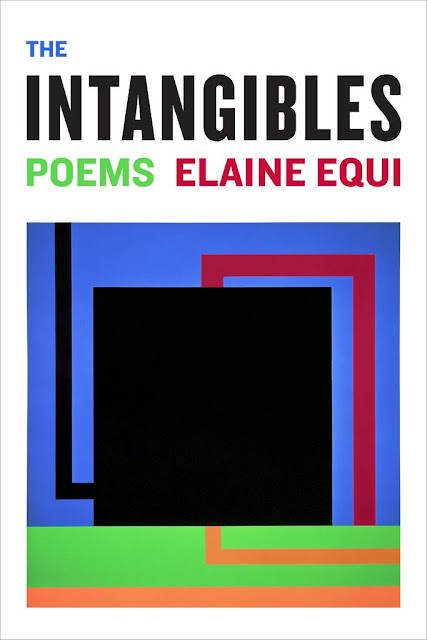 I've have admired Elaine Equi's poems since reading her 2011 book Click and Clone. How do you create such witty, precise, clever and indelible poems without being precious? As one who errs on the verbose, I respect these mostly thin, lithe, spare poems that pack so much punch in their syntax. The fun continues in her new book, The Intangibles. Communication, in all sorts of fashions and forms, is a theme which runs throughout: "We have many times / met without meeting / like this, / at some dog-eared / intersection, / each in search of / the right words" or "... peckish news / gets told in tweets, / gets old so quickly. / In place of one place / a billion tiny customized versions / appear targeted specifically / to your tastes." Or the changes in just basic gestures and communicating: "I remember when people / used their hands to gesture / and would meet each other's eyes / with curiosity or annoyance," / but now everyone looks down..." When speaking of all the writing classes taught, with "blackboards I never write on," the speaker reflects, "... together we form a current--a kind of river / that has drawn me--drawn us--forward toward I'm not sure what.." Overall, the poems blend beautifully together, album-like, such as the ode to Excedrin ("Monogrammed Aspirin") into "If I Weren't a Poet, I'd Be a Pharmacist:" "Counting pills, / not syllables." One favorite poem of mine is "My Grandmother's Glass Skyline" from the "Perfume Dioramas" which lists perfumes with their sensuous names and eye-catching bottles which "gave her bungalow / in Chicago / an exotic air." Throughout, there's a mix of the intangibles at dance with the tangibles, both are unavoidable. As one drawn to concrete imagery over straight lyricism, I love these poems, like the perfume ones, for their objects ("What is the difference between objects and things? / Things, I think, have less personality"). When thinking of ghosts, they "must still consider fashion-- / must clothe its invisibility in something / if it is to "appear" in public." As one who believes and has seen ghosts, I do remember their outfits. How they obtain those outfits, who knows? It's intangible.