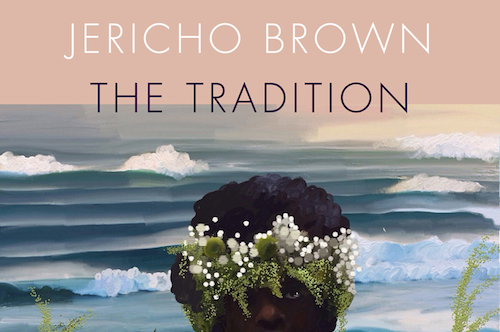 "The blk mind is a continuous / Mind. There is a we. I am among them. / I am one of the ones. I belong." Jericho Brown's The Tradition is an extremely exact and beautiful book of poems. It truly feels like an absolute collection--one that builds slowly and elegantly--with a gratifying circular effect. I am thinking in particular of its "Duplex" poems which echo imagery and music through form and repetition-play. In the first one, "A poem is a gesture toward home," and it immediately establishes story, the remixing of memory and one vivid concrete detail (that "burgundy car") that end up being carried throughout until its ultimate, gut-punch conclusion--one that so few poetry collections can deliver, and perhaps the most striking I can think I've read in years. The poems feel of-the-moment, but also timeless, and there's a lovely leanness to them, despite their wide emotional, political scale. The book is flooded with the beauty of flowers, their fragility, intertwined with pain. The title poem is a fulcrum, with the scientific names of flora intermingled with black victims of violence. "Summer seemed to bloom against the will / Of the sun, which news reports claimed flamed hotter / On this planet than when our dead fathers / Wiped sweat from their necks." Such a sweeping way Brown is able to capture the oppression, anxieties and deep history in just one sentence. As in the "Duplex" pieces, Brown's poems are often rooted in a concrete image that grows more in its complexity until a final knock-out line, like the ones in "The Trees," where describing the crepe myrtles in the front yard: "It's not that I love them / Every day. It's that I love them anyway." Sonically, thematically, everything clicks. And complexity lies in simple words too, like "big" and "fine," which are evoked as "legend," used "long ago" of men describing women and cars. There is a nick of humor, but Brown, per usual, treads deeper, in describing the eventual "wear and tear" of people and things, once prized. If Brown's art in The Tradition delivers painful subject matter through pleasurable aesthetics (those sturdy capitalized lines; the straightforward diction and internal rhymes), it's akin to a statement the speaker delivers boldly in "Night Shift": "... I am touched, brushed, and measured, I think of myself / As a painting." Abuse and torment and personal and societal perils are lensed through art and succinctness, such as the blues refrains in "Entertainment Industry" ("I don't have kids / Cuz I'd have to send them to school / Ain't that safe as any / Plan for parenthood / Mass shooting blues"). One could slip into simplification, but Brown's poems are extraordinarily-wrought ("Layover" is a skinny poem of haunting power). In "Dark," I am reminded of what Major Jackson does in "Double Major," where the poet has a conversation with himself. Like Jackson, Brown also opens up the poem into something larger about identity and place in the world. In The Tradition, I witnessed the craft on display, but I also was so emotionally connected throughout, that I wasn't just admiring the skill, but deeply affected as well. I recently purchased this book on CD, and am looking forward to its arrival, to hear Brown's work back in all its (morning) glory.

Invention by Jericho Brown (an essay on the "Duplex" poems--which I'm obsessed with)
Posted by MrJeffery at 5:11 PM