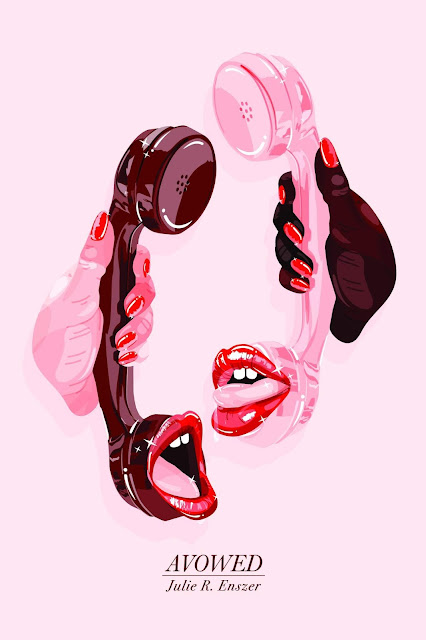 Out of all the poetry collections I've read so far this month, Julie R. Enszer's Avowed was by far the breeziest. I have had the book on my shelf for a few years and have always absolutely loved its cover (an image by artist Anna Sudit). The two phones with lipsticked mouths and visible tongues ultimately gets at the eroticism within many of Enszer's poems and also the inherent constant human symbiosis and human separation within relationships. I enjoyed the plain-spoken style of Enszer (in "Devoted": "For years i wanted to be my aunt: / direct, plain-spoken, clear about priorities. / Beginning with family but extending to a wide array / of social and ethical responsibilities"). But there's also world play throughout as well--as described in her HuffPo piece on the book, she writes, "The word avowed plays with both the theme of being out as a lesbian and being in a committed relationship. The phrase ‘avowed homosexual’ appears in many early news stories about queer people. ‘Avowed homosexuals’ are those men and women who did not deny their sexual orientation or their erotic desires; thus, there is certainty and bravery in the phrase ‘avowed homosexuals.’ Yet, in many cases, media used this phrase to describe gay men and lesbians luridly to heterosexual people."

Adding to the sense of play and fun, Avowed is split into sections with famous pop-rock songs to herald them in. The book is largely about the speaker's marriage and also her relationship with her father and his sexuality. The poems about the father ultimately emerge as the most complex as if there's still an underpinning of dissatisfaction, ambiguity. There are explicit moments of the book expressing the joy she experiences with her beloved, but, as in any marriage, there are also lots of mundane moments too (lots of dish-washing is happening!). This is contextualized in the poem "After Fifteen Years," which focuses on the bond of marriage cocooned within a litany of all the to-do projects around the house. In "When the Marriage License Arrives," she observes, "After years of waiting for / formal state recognition of / our life, our love / our relationship, / when I finally receive it, I recoil. / Is paper all that makes a marriage?" Overall, I enjoyed this collection and Enszer's refreshing directness and no-frills style.