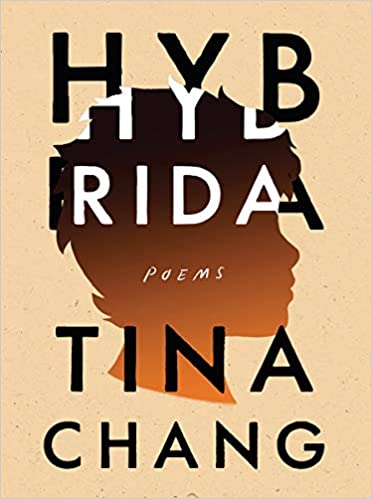 Not to play favorites, especially after reading so many great books so far this month, but Tina Chang's Hybrida might be the most effective poetry collection I've read this April. Like Reginald Dwayne Betts' Felon (both featuring the compelling use of the ghazal) and Clint Smith's Counting Descent, themes of racial identity are expressed with rich syntax in unique, complex ways. Chang writes much of the book from the point-of-view of a new mother of a mixed race son. I truly felt this book, with voices so strongly realized. I read the book in e-form, but I yearn a physical copy to sense if it has a different effect, especially since Chang uses so many unusual formats including in her ekphrastic pieces. In Hybrida, there's an underlying worry and fear of bringing a child into this unsettled world and racist country, which is vividly evoked throughout, particularly mid-way through in "Astroturf" when the pregnant speaker rests in the synthetic peace of "plastic grass" and jarred into reality by listening to girls making fun of a black boy and asking him to leave. "My boy would be here soon. Six more days into the future I would meet him. I touched the area that moved. I waited." Chang has a way to envelop the reader in her patchwork of scenes and observations. There is much brilliance in "Hybrida: A Zuihitsu" which takes the associative form and plows forward: "If I grew up with dual language, dual identity, how can anything feel unified?" The piece becomes almost an essay on Chang's collection itself, its ideas of forms, identity and language, with interruptions of questionings: "By raising a black boy, do I understand what it means to live as a black boy? How do I speak of his existence without appropriating his existence? I return to the language of mothers." And later, a quite apt statement: "Media can obliterate a spirited word (world)." I am reminded there of how I felt uneasy dissecting Luljeta Lleshanaku's Negative Space which sometimes spoke of actively eschewing clarity. While there is much ambiguity and resistance in Chang's poems here, like "The field" that "becomes wider and wider," there's also a searing clearness in emotion and visual-making, ending everything with a drawing from the son himself in an almost guttural, heart-stopping way.

"Waterborne: A Review of Tina Chang's Hybrida" by Jerome Ellison Murphy from The Adroit Journal
Posted by MrJeffery at 9:56 AM